My Meeting With Jeremy Graham (Hero in Bride of Second Chances)

This idea is kind-of-but-not-really stolen from Rose Gordon who does character interviews on her blog.  This is not an interview, but it is an emergency meeting I am having with Jeremy Graham who is the hero in Bride of Second Chances.  As most of you know, I am currently writing his romance on my first draft blog, and since I have a word count to meet at the end of each day, this is an emergency.  It’s not like I can stop writing and put his story on hold.

So here we go.  This is me having a conversation with one of my characters. 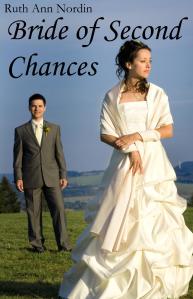 Alright, Jeremy.  You read the book summary when I gave you the plot info, didn’t you?

*shrugs*  I might have skimmed it over.  It was a busy day when it was delivered.  That was my wedding day to Rebecca.  You remember her, the woman you killed off before the prologue was over.

That’s because you’re supposed to feel guilty for falling in love with her sister, Jane.  But when I was writing yesterday’s post, you didn’t look guilty.  You were laughing and having a great old time, and at Rebecca’s grave of all places.

That’s because I thought it would be funny to let Jane throw a drumstick at her brother.

Maybe, but some people who read the book will criticize me for making her immature or being inaccurate for the time period because women didn’t act out in such horrific ways back then.  They were demure and soft spoken at all times.

*grimaces*  Who wants a woman like that?  Give me a woman with passion.  I stand a better chance of enjoying the bedroom that way.

Are you saying that demure and soft-spoken women can’t be fun in bed?

I’d rather not take my chances.  It’s perfectly fine if Jane wants to smack her brother upside the head with her purse or throw a drumstick at him.  He has it coming for what he did.

Well, she would have missed.  She has terrible aim.

Yep.  Were she around in grade school this day in age, she’d be picked last in gym class.

Hmm… Sounds like you’re molding a part of your own childhood into her.

Anyway, I published Bid for a Bride back in February, and at the end of that book, I included the book summary for the book you’re in.  Now, I could have written Shotgun Groom, but I’m writing your story, and part of the agreement is that you’re supposed to do your part.

I am doing my part.  I cried when Rebecca died and have been faithfully attending to her grave every week.  It was your idea to make me marry Jane when she could have run off to Edith’s house.  I don’t know why you didn’t do that.

Because the plot involves you marrying her.

And so I did.  See?  I followed through with my part.

If you wanted that to happen, you should have made her like that sister-in-law of hers.  Now there’s a woman I wouldn’t have trouble not liking.

So we’re only 23,000 words into this book that I am trying to make 65,000 words, and you already admit you like Jane?  Right here on this blog?  In front of everybody?

I always liked her.  We were friends while I was married to Rebecca.  I don’t know why you’re surprised that I like her now.

I’m supposed to end up loving her.  How can I do that unless I like her too much?

But you can’t do it too soon.  It’s all about timing.  You have some other things coming up in this book, and if you rush through this, then I can’t get to the ending.

It’s a romance.  We all know how it ends.  I believe there’s a Jeremy Jr. in the picture somewhere.  There’s only one way Jr. is going to get here.

Stop smiling like that.  This is serious.  People are relying on me to get you to the woman who gave birth to you.  They also want to see how Lucy and Brian are doing.

Who are Lucy and Brian?

I don’t know.  You’re not giving me enough motivation to follow your grand master plan to make me needlessly suffer for 3/4 of the book.

How can you be suffering?   You eat cake once a week.

But you married me early on to Jane.  Can’t you at least let me see her naked or something?

No way.  You’ll never stick with the plot if I do that.  I know how you are.  You’re in my head, after all.

It is not easy being your character, Ruth.

Trust me.  I’ve been writing romances since December 2007.  I’ve learned some things about telling a love story.

Maybe, but I can’t make any promises.

I’ll have you go to Omaha during Christmas.  That ought to slow things down for you.

Hmm… I don’t know.  Going to Omaha might be a mistake.  It could give me ideas.  Edith’s expecting.  Jane might like to have a child, too.

Just as I thought.  You were awful in gym class!  Well, Jane’s calling.  Cake is ready.  *scurries off*

And this is why I can’t control my characters.  I don’t know if he’ll cooperate or not, but I tried.

Ruth Ann Nordin mainly writes historical western romances and Regencies. From time to time, she branches out to other genres, but her first love is historical romance. She lives in Omaha, Nebraska with her husband and a couple of children. To find out more about her books, go to https://ruthannnordinsbooks.wordpress.com/.
View all posts by Ruth Ann Nordin →
This entry was posted in Bride of Second Chances, Jeremy Graham. Bookmark the permalink.