This is taken from To Have and To Hold.  Isaac is four (almost five) and Rachel is one.  Mary just had a fall, and Dave is waiting for her to wake up. 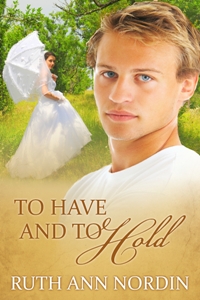 Dave checked out the parlor window to make sure Isaac was staying on the porch before turned back to Mary who remained unconscious on the couch. He went back to her side and gently lifted her head where he saw her hit the step. There was no doubt about it. It was a large bump, but there was no bleeding. No bleeding was a good thing, right? It meant she was alright. Her breathing was normal and her skin color was good. So she was fine. She just had a bump. How many times had he or his brothers gotten those while growing up?

Gently setting her head back on the pillow, he heard Rachel fuss from upstairs. As much as he hated to leave Mary, he didn’t see he had much of a choice. He hurried up the stairs and found the seventeen-month-old girl ready to climb out of her crib.

“Oh no, you don’t,” he kindly admonished as he stopped her.

He picked her up and realized she needed a new diaper. Frowning, he debated whether to wait until Mary woke up or take care of it himself. He’d never changed one before and didn’t exactly relish the opportunity to do it. Mary should do it. She knew what she was doing. After he set her down, he took her hand and led her down the stairs.

“Ma. Cookie,” she replied with a large smile on her face.

He chuckled. If Mary hadn’t been so skilled in the kitchen, then Rachel might not feel the need to mention food every time she spoke about her mother. But it was one of the things Mary was known for, so he couldn’t blame the little girl.

When they reached the parlor, he peered through the screen of the open window where Isaac was showing Jasper the frog. “Isaac, why don’t you bring that frog in here and show it to your sister?” Hopefully, Rachel would be entertained enough with the frog so he could focus on Mary.

“Alright, Pa,” Isaac said and put the frog back into the box.

Dave strode to the storm door and opened it so Isaac could come into the house. “Rachel, check out the frog Isaac caught.”

“Fog?” Rachel asked from where she stood next to the table.

She peered into the box. “Fog.”

Amused, Dave turned back to Mary and tried to figure out what he should do. Maybe a cool, wet cloth would help her wake up. Glancing at his children who were touching the frog while Isaac continued his vain attempt to teach Rachel how to properly say the word, he headed for the kitchen. Once there, he found a dry washcloth and dipped it in the bucket of water resting on the work table. When he returned to the parlor, he saw Mary’s eyelids flutter and eagerly sat on the table next to her. He wasn’t sure if he should put the cloth on her forehead, so he decided to wait and see if she needed it.

“Mary?” he softly asked as he took her hand and gave it a light squeeze.

She stirred and a sigh escaped her lips.

“Ma?” Rachel left the box and waddled over to Mary. She tapped her mother’s arm. “Ma?”

“It’s alright, honey,” Dave told his daughter. “She’s waking up. We just need to be patient.” He stroked Mary’s hand with his thumb.

Holding the frog, Isaac walked over to them and leaned toward his mother. “When will she wake up?”

“She’s waking up right now,” Dave said. “Put that frog back in the box. She doesn’t need that thing staring her in the face when she opens her eyes.”

Isaac hurried to obey his father while Rachel tapped her mother’s arm again.

“Rachel, I told you not to do that,” he kindly admonished.

“Because it’s rude to poke people.”

As he thought of how he could explain this to a one-year-old, Mary’s hand went to her forehead and she groaned. He released her other hand and stopped Rachel from poking her mother another time. “Go see the frog. Your mother’s fine. She just needs some space, alright?” Turning to Isaac, he said, “Get your sister over to the box.”

Isaac, who had put the frog back in the box, sighed but went over to her and took led her away from their parents.

Relieved, Dave turned back to Mary and, noticing that she had removed her hand from her forehead, placed the cloth to her forehead.

She opened her eyes then and touched the cloth. Her eyebrows furrowed and she scanned the room.

Her gaze went back to him and she frowned. “Where am I?”

“In the parlor. You fell down the porch steps and blacked out, so I brought you in here. Do you need anything? Can I get you a glass of water?”

She swallowed and looked at their children who were watching her even though they stayed by the box. “I don’t understand…”

“I’m not sure why you fell down the steps, but from where I was, you were on the porch, turned and then fell. Jasper must have seen you trip or something because he ran over to you.”

He let out a slight chuckle. “Yes. He always seems to be watching over you, doesn’t he?”

The chuckle died in his throat and he frowned. “What do you mean ‘who’s Jasper’? He’s our dog.”

“Our dog?” She struggled to sit up, so he got up from the table and helped her. When she placed the cloth in her lap, her eyes darted from him to Isaac and then to Rachel. “I don’t see a dog.”

“He’s outside.” He settled next to her and studied her. “Mary, are you alright?”

Blinking, her head snapped in his direction. “Mary? Is that my name?”

If she’d been the type to joke, he would have laughed, but the problem was, in all the time he’d known her, she wasn’t one to do such a thing. Concerned, he reached for her hand and held it. Though she didn’t resist his touch, she didn’t give him the familiar gentle squeeze he’d come to expect.

He glanced at their children and asked, “Do you know who they are?”

She turned her gaze in their direction and slowly shook her head.

“What about me?” he whispered.

Darting a look at their hands that were clasped together, she said, “No, but I think we’re close. Are we married?”

“Yes.” Taking an uneasy breath, he carefully thought over his next question. “Do you remember anything?”

She bit her lower lip and scanned the room. After an uncomfortable moment, she sighed. “No. All I remember is waking up here.”

All he could do was stare at her and wonder how she couldn’t remember him or their children. They’d been such an important part of her life, and in one moment—just like that—she didn’t know who they were? Apprehensive, he glanced at the children who were unusually quiet as they watched her, probably understanding something was wrong but not knowing what.

“We have to see the doctor,” he finally decided and stood up.

Rachel walked over to her mother and held her arms up. Despite the uncertain expression on her face, Mary lifted her up and studied her daughter.

“I think she means she needs a new diaper,” Dave answered. “Do you remember how to change a diaper?” He certainly hoped so because he didn’t have the faintest idea, and realizing something was seriously wrong with her didn’t put him in the clearest of minds to attempt the task.

“I know,” Isaac said as he left the frog in the box and went over to them. “I can tell you how, Ma.”

Nodding, Mary got up from the couch, still holding her daughter. “What’s your name?”

“Alright, Isaac.” She shifted Rachel to her other arm and cleared her throat. “Where are the clean diapers?”

As Isaac led Mary up the stairs, Dave stood still for a moment. How could this be happening? All Mary had was a fall. It shouldn’t have been serious. It was just a bump on the head. There wasn’t even any blood. He rubbed his eyes and tried to figure out what to do. The doctor. He’d just said they needed to go see the doctor. He wasn’t thinking clearly. It wasn’t like him to get distracted like that, but it hurt to watch Mary look at him and their children as if she’d never seen them before. And she looked so scared.

Releasing his breath, he decided while Mary was upstairs taking care of Rachel, he’d better get the wagon ready to take into town. The sooner he saw the doctor, the sooner he’d start getting some answers.

Ruth Ann Nordin mainly writes historical western romances and Regencies. From time to time, she branches out to contemporaries romances and other genres (such as science fiction thrillers). For more information, please go to www.ruthannnordin.com or check out https://ruthannnordinauthorblog.wordpress.com.
View all posts by Ruth Ann Nordin →
This entry was posted in Uncategorized. Bookmark the permalink.
%d bloggers like this: