The Nebraska Series Hero You’d Like To Date (Another Poll Where You Can Vote!)

This will have to be the last competition I run between the best hero in the Nebraska series because I’m out of ideas on things for the guys to compete on.  Someone suggested the guy who can come up with the most romantic date, so that’s what I’m doing tonight.  If someone else can think of something I can have them compete for and if I can figure out how to do it in a way that won’t put a bunch of people to sleep, I’ll be glad to do it.  😀

Dave Larson: Wait a minute, Ruth.  I wanted to talk to you about doing a third book featuring me and Mary.

Ruth: I’m not even done with the second one, Dave.

Dave: But there’s no harm in planning ahead.  You are almost done with To Have and To Hold.  I believe you have about 11,000 words left and then you’re done.

Ruth: About that, yes. But this post isn’t about your second book or even a “we’ll see” third.  I have a lot of other books to write anyway, so I can’t even think of a third book.  Not that I’m planning on writing a third one.

Dave: I understand you’re busy.  I saw the ridiculous amount of books you’re working on at one time.  Don’t tell me you make the word counts every single day on those.

Ruth: Well, no I don’t on average, but I have the really good writing day where it actually happens.

Dave: That’s why I’m here.  I want to help you.  I even took a writing course.  Did you know you write too many unnecessary words like “Well” and “just”?

Dave: Wait a minute.  You’re telling me you break the rules on purpose?

Ruth: Yep.  But that’s not the point of this post.

Dave: You’re right, and we’ll get to the next round of who is the best hero, but first, I wanted to propose a few ideas on my third book.  I’ll even be your ghostwriter.  No one needs to know.

Dave: Oh, I’m sure they’ll keep it a secret.  They’re the trustworthy sort.  Anyway, here are some ideas I was brainstorming the other day.  I’m the one who gets amnesia.  Think of how much fun it’d be for me to rediscover my love for Mary.

Dave: It wouldn’t be the same idea.  This time we won’t go to Maine.

Dave: Fine.  We’ll ditch it.  How about a story where some robbers take Mary hostage and I have to rescue her?

Ruth: You really want to spent 80% of the story away from Mary?

Dave: Well, once I rescue her, we could make our way back home and face some hardships.  I could save her from a mountain lion or a bear.

Ruth: I’m not seeing it.  Look, Dave, I need to get this post going.  We’ll start with you.  What is your idea of the perfect date?

Dave: What?  I can do it.  I might not look like it, but I got some pretty great muscles under this suit.

Ruth: You are going to defeat a mountain lion or a bear with your hands?

Dave: I might have to use a gun, but I don’t mind confronting the wild animals to save her life.

Tom Larson: You’re missing the whole point of a date, Dave.  It’s not to prove how great you are.  A perfect date is treating your woman like she’s a queen.  What I do for Jessica is give her a back massage.  The poor thing works hard all day long to take care of the house, me and the kids.  She needs a special time to be pampered.

Ruth: Sounds good to me.

Ruth: No, but if I did, I think I’d pick this one.  What woman doesn’t want to be pampered?

Owen: Ah, but what is a massage without a home-cooked meal to go with it?

Tom: Home-cooked?  You got a pizza.

Owen: That I made.

Dave: You’re right.  That’s nothing like saving a woman’s life.

Tom: Will you stop it with the saving her life from a bear or mountain lion thing already?  Those don’t even live in Nebraska! 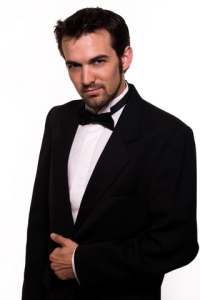 Neil: I think Dave plans to have the robbers take Mary all the way to Washington or something.

Dave: I was giving an example.  It doesn’t have to be a bear or mountain lion.  It can be something else.  Maybe she almost drowns.

Neil: After you taught her how to swim in Eye of the Beholder?  Then you’d have to admit you’re a lousy teacher.

Dave: Ugg.  I can come up with something good.  Just give me a moment.

Ruth: Neil, you’re all dressed up.  What is your perfect date?

Neil: I’d take Sarah out to a top-notch restaurant and then to the symphony.

Neil: You only say that because you don’t have refined tastes.

Rick: Refined tastes?  I’ll tell you what refined taste is.  It’s whisking the love of your life off her feet and doing something totally unexpected but very romantic.

Neil: Which would be…?

Rick: Eloping.  What could be more romantic than surprising her with vows to cherish and love her till death do you part?

Tom: Um, like we already made those vows so it’s not going to happen again.

Rick: Not unless you renewed them.

Dave: If that comes with a renewed wedding night, I’m in.  But only after I save Mary’s life.

Tom: We get it, Dave.  You want to be the awesomest dude in history.  Can we get on to Joel now?

Ruth:  Weird.  Where is he?  I told him to get here tonight.  Let me go get him.  *steps away from computer to hunt him down* 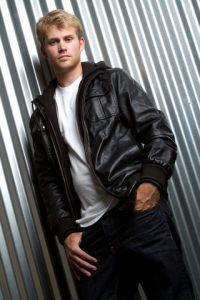 Joel: Because this whole thing is a waste of time.  I got people who are sick and need help, and you’re bugging me so I have to participate in this sham of a competition?  We all know who’s going to win.   Dave can say he’d spit in Mary’s eye–

Joel: And people would vote for him like crazy.  It’s not my fault I was only 17 when Eye of the Beholder was written.  The only reason Dave wins these stupid competitions is because of Mary.  If it weren’t for Mary, no one would care about him.

Ruth: That reminds me.  I never shared the numbers from the polls.  A couple more votes came in.  Ready?

Ruth: But I got good news for you, Joel.  Here are the results for the most romantic hero:

Dave: He only won because he whined.

Joel: Oh sure.  You can’t take it, can you?  For once in your life, you’re not first, and it bothers you to no end.

Dave: Because you went on and on about how wrong it was for people to vote for me.  As if it’s my fault I am who I am.

Joel: And we know what to call you. *rolls eyes*

Ruth: Enough, guys!  So Joel, do you want to tell us your idea of a perfect date?

Joel: Well, alright.  I’d take April on a sleigh ride and enjoy the time talking to her.

Dave: If you include the Abominal Snowman and save her from it, then I can see it being a date worth going on.

Joel: Oh good grief.  There is no such thing as an Abominal Snowman.

Dave: And you would know because…?

Joel: Because I’m not an idiot.

Tom: Wow!  I can’t believe Joel called someone besides me an idiot.

Dave: An idiot?  Did you just call me an idiot?

Ruth: While they continue to argue, I’m going to set up the poll so you can vote.  😉

2 Responses to The Nebraska Series Hero You’d Like To Date (Another Poll Where You Can Vote!)