I was going to do an interview based off of yesterday’s post from The Earl’s Inconvenient Wife, but I’m having trouble finding Claire’s picture.  I found Lord Roderick’s picture just fine, but getting her has been harder than I thought it would be.  I keep finding women with dark hair who either look too happy (and Claire’s pissed so she can’t be happy) or too young.  Yes, Claire is 18, but I don’t want her looking like she’s in high school.  I’ll search again tomorrow.

For tonight, I’ll do an update.

1.  To Have and To Hold is back from the editor.

Now it’s time for me to go over it before the proofreaders get it.

2.  Thanks to everyone for letting me know what I missed in the Regency I’m writing.

It really does cut down on how much I have to do in the long run to get the basics straightened out.  I have been doing my own research, but it seems that the stuff I’m learning has more to do with the moral climate of the time period and how important it was for some ambitious parents that their daughters marry up, esp. to titled men.  Though I am aware of how often mistresses and lovers were used (discretely, of course), I can’t allow it in my books.  Historical accuracy can only go so far before I say, “It’s fiction and I’m writing these characters my way.” I have to write heroes and heroines I can love.

3.  Bound by Honor, Bound by Love, Mitch’s Win, and Her Heart’s Desire are trucking along.

Due to the kids and I getting the stomach bug again (I blame it on the up and down temps we’ve been having this year), it’s been slow going with my daily word counts.  Some days I can manage them and on others, I do good to write a blog post or answer emails.  Then I have other stuff pop up that demand my attention and like Feb. 1 coming around and needing to get the Giveaway Contest info ready for the Bargain Books for Your Nook blog that I co-administer.  Believe it or not, that is almost a full day’s project.

4.  I am getting a paperback copy ready for Shotgun Groom and Isaac’s Decision.

5.  I can’t use the ebook covers for the Regency books on paperbacks because the terms and conditions on the site I got them allow for ebooks only.

So hmm…  I think I’ll get another cover for the paperback (nothing fancy but maybe scenic) and upload the “other cover” thing to share the ebook cover so people know it’s the same book.  Not that my paperbacks are popular or anything, but I like having paperback copies of my books on my bookshelf.

6.  I have to put Just Good Friends on Hold.

I have tried, unsuccessfully to manage five books at a time, but even at 100 words a day, I can’t swing it.  So I’m putting Just Good Friends on hold until I finish one of the other four books I’m currently working on.  I think four is my limit.

7.  Got the cover (finally) for The Write Husband, which comes after Runaway Bride. 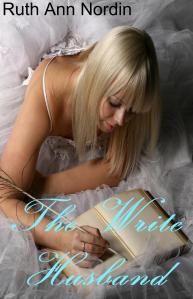 Mark, of course, won’t be interested in Sandy because he wants Caitlyn’s sister, Lexie.  He elopes with Lexie in Runaway Bride, which causes all kinds of problems with her mother.  Those of you who remember the grief Caitlyn’s mother caused her and Chris in Suddenly a Bride know what kind of woman we’re dealing with here.  😉

So anyway, Sandy is going to be majorly bummed out because no man she’s fixed up with works out and Mark’s the final straw.  So she swears off men and decides to spend the time she used to spend on trying to find a husband on writing a book.  She’s going to pick a fantasy because I want to do something where I don’t have to adhere to the natural laws I’m bound to in my other romances.  She’s going to write this fantasy and the villain in her book doesn’t want to be the villain, so he pulls her into the story to try to talk sense into her.  She won’t fall for it so he’s going to keep her hostage in his palace or something.  I’ll have to work out the details as I write the book, but I’m thinking he’s going to appear to her as a muscular hunk but in reality he’s going to be a nerdy type.  I’ve wanted to do a nerdy hero and this will work.  I expect this to be a fun book since Sandy will have to deal with an irate character who is going to fight her on how he thinks the story should go.

I think I’ll end the updates here so I can finish the Giveaway page for Bargain Books for Your Nook.