Rick Johnson: Who’s next to the stand?

Joel Larson: The court calls Sally Larson to the stand.

*everyone looks back to see where Sally is* 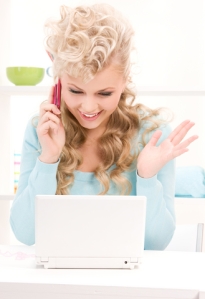 Sally: I love those shoes!  Yes, I’m looking at the site right now.  Definitely buy them. It’s perfect for the new dress you just bought.  I’m telling you, Ethel Mae, you need to run out and buy them before they go out of stock.

Sally: *still talking into phone* Well, I don’t have a dress in that particular color, but then I don’t think that color goes well with my complexion.  It’s perfect on you.  It brings out the color in your cheeks.  *silent for a moment* You didn’t!  You did?  Really?  And what did she say?

Sally: *jerks and looks up from her computer* Oh, I have to go, Ethel Mae.  Yeah, I’m in court because my brother is an idiot.  Yeah, the one who thinks we need to join some kind of union because he’s so much better than the rest of us.  As if we’re here to do his bidding. *silent for a moment* I know.  He was so nice in Her Heart’s Desire.  I don’t know what happened to him either.  I guess fame goes to some people’s heads.

Rick: *whispers to the bailiff who hurries over to Sally and closes the laptop and takes her cell phone away from her* We’re having a hearing, Sally.  You can talk to your friend after the verdict.

Tom: I’m pretty sure cell phones and laptops aren’t allowed here, especially since we live in the 1800s.

Sally: No matter what time period it is, a girl has the right to shop and talk to her friends.    *goes up the front of the room and sits on the witness stand; glances at Rick and bats her eyelashes at him* You’re not mad at me, are you?

Rick: *smiles* Nah, I guess not.  Just remember you can’t do it in any of the books because then we’d all get in trouble for historical inaccuracy.

Sally: Sure thing, honey. *winks at him*

Tom: *rolls his eyes* Can we get on with this already?

Joel: Right. *approaches Sally* Now, Sally, what do you think about Ruth?

Sally: She’s awesome.  Not only did she give me a great husband, but I’m one of her best characters.

Tom: Objection!  That’s is conjecture.  No one can say Sally is best character.

Sally: *crosses her arms and pouts* I said one of her best.

Joel: You were in favor of the plot for Isaac’s Decision.  In fact, you convinced Rick to marry Isaac and Emily.

Joel: Is it fair to say you thought Dave overreacted when he tried to rewrite that book?

Sally: Of course, he overreacted.  He’s not a storyteller.  He doesn’t have a literary bone in his body.  Can you imagine what a catastrophe that story would have turned out to be? I mean, he was writing, and I quote:

Isaac wasn’t sure if listening to his father was a good idea. But he knew his father had his best interest at heart, so he decided to take Eva home without any of his brothers or sisters tagging along.  He took Eva home, and they had a wonderful conversation.  He thought that maybe his father was right and he would give Eva a second chance.

When they arrived at her home, her father asked him if he wanted to visit for awhile, and he agreed.  Isaac had such a good time, he asked Eva if he could court her.  She said yes but said she couldn’t officially be courted until after her teaching contract was over.  Soon enough, it was, and they did.  By the end of the year, they were married and lived happily ever after because she was a good wife who was a lot like his mother and he had a wonderful mother.

Sally continues: I mean, who in their right mind would read such a stupid story?  Ruth did Isaac and Emily a huge favor of ditching what David wrote.

Joel: Ruth claims she deserves compensation from the way she was treated.  Do you agree?

Sally: Sure.  If she isn’t, then David might pull some other sneaky stunt.  And if that happens, Ruth might give up because it won’t be worth it to have a character and his naive  wife creating a ruckus all the time.  Who wants that hassle?

Joel: Thank you, Sally.  That’s all I have to say.

Rick: Do you have any questions, Tom?

Tom: Indeed, I do.  *walks over to Sally* What does your husband do for a living?

Tom: Will you just answer it?

Tom: My point is that being a judge’s wife, you ought to be aware of the Constitution, specifically the First Amendment, which just so happens to be the freedom of speech.   That being the case, isn’t Dave within his rights to speak up when he doesn’t like something Ruth does?

Sally: There’s a difference between speaking up and being a pest.  He was a pest.  Hiding from everyone so we all thought he was kidnapped is taking it too far.  Anyone with half a brain can see that.

Tom: But if Dave wants to form a union and gather characters who’ll go along with him, then that’s his right.

Sally: If you must persist in that crazy talk, then be aware that Ruth also has the right to give up the Nebraska books and find other books to write.  Book which, I might add, will feature other characters.  And if David bugs those characters until they give in and go along with it just to shut him up, then she might give up writing altogether.

Tom: *stands silent of a moment and sighs* I can’t think of anything else.

Joel: *snickers at Tom who mutters for him to shut up*