Mary Larson is at the Witness Stand

Rick: Joel, is there anyone else you want to bring up to the witness stand?

Joel: No, your honor.

Rick: Tom, who is  your first witness?

Tom: I want to call Mary Larson to the stand.

Mary: *goes up to the stand and sits down*

Tom: It goes without saying that this whole ordeal has been hard on you and the children, especially since you’re in the family way.

Mary: It’s no secret I didn’t like the fact that a tree nymph wanted to join Dave’s union.  There’s only one reason a nymph would do such a thing, and unlike my naive husband, I know what that reason is.

Tom: I don’t think anyone here will argue that it’s your right to defend yourself and your children against a woman of loose morals.

Mary: She’s not as innocent as she claims.  I don’t think she even knows how to read.  She probably saw Dave’s picture and wanted to use him for her…  *shifts uncomfortably in the chair* Well, being a woman in the 1800s, I won’t say the exact words.

Tom: I think we all know what you’re thinking, and I, for one, agree.  Kyala was up to no good.

Tom: On what grounds?

Rick: I can speak for myself, Tom. *looks at Joel* On what grounds?

Joel: We can’t say for sure what Kyala’s motives were.

Rick: Objection denied.  It doesn’t matter what Kyala’s motives were.  What matters is why Mary did what she did.  Continue, Tom.

Rick: Well, you are the one questioning Mary right now.

Tom: No, I mean, you’re actually telling Joel his objection doesn’t stand and that I have a good point?

Rick: *sighs* Can we please get on with the case?  I’d like to be done with this before July 1.  At the rate it’s going, we’ll be here until Christmas.

Tom: Besides the threat you felt Kyala posed, you also worried about something else, didn’t you?

Mary: Yes.  I worried that Dave’s persistence was going to bother Ruth until she dropped the Nebraska series.  As Sally said, I didn’t think Dave was helping the situation.  While his fierce determination to stick with something he believes in is one thing I love most about him, in this case, it worked against him.

Tom: So what you did was meant to help Ruth, not hurt her.

Mary: Yes, but I also wanted to help Dave.  Ruth plans to write another book about us and then about our children.  Dave has as much to lose as the rest of us do.

Rick: Joel, do you have anything you wish to say?

Joel: *stands up and approaches Mary* Yes, I do.  Mary, do you honestly think Dave would ever cheat on you? 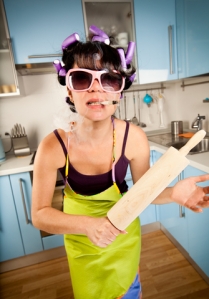 Joel: So why were you so threatened by Kyala that you demanded Dave follow your sinister plan to kidnap him?  You gave him no room for argument as you used your womanly wiles on him.

Tom: Objection, your honor!  Not only is that picture grossly modern, but it taints Mary’s gentle nature.

Joel: On what grounds?  I’ve just established that Mary doesn’t believe Dave would have run off to a tree with Kyala.  It makes her testimony questionable.

Rick: First of all, “womanly wiles” suggests that she was using her sex appeal on Dave, not going psycho on him.  Second, I can’t allow a picture that modern in this courtroom.  A laptop and cell phone, okay.  But the rollers, sunglasses, modern kitchen….  It’s too much.  And third, that is the ugliest shade of green I’ve ever seen.  Remove the picture at once.

Joel: *groans but obeys*  Fine, but let it stand that Mary didn’t believe Kyala was the threat she just claimed.

Mary: Kyala was a threat.  Even if the man is faithful, it’s still unpleasant for the wife to sit idly by and watch a young, beautiful woman sporting off her hourglass figure in front of him.  No wife wants that.

Joel: So why didn’t you kidnap her or ship her off to some Greek island somewhere?

Mary: Because given the nature of her personality, I figured if I put up a resistance, then she’d want Dave even more.  Women set on sleeping with married men find the challenge much more appealing if the wives fight them.  By simply removing Dave from the spotlight, I figure an airhead like Kyala would get bored and move on.  And she did.  She was flirting with Joseph Connealy and Owen Russell.  She’ll sleep with anyone.

Joel: Let’s say your theory was correct and that you had to kidnap Dave to get rid of her.  How did you talk Dave into it?

Mary: *blushes* I’d rather not say.

Joel: Then the picture of the rolling pin, tacky sunglasses, appalling apron, and modern kitchen stands.  I’m putting it back up.

Rick: Don’t you dare.  No one wants to go blind looking at it a second time.  Joel, I think it’s safe to say that Mary used her womanly wiles to convince Dave to fake his own kidnapping.  Hence why her face is as bright as a tomato.

Joel: Even so, I think it should be noted that Dave wasn’t smart enough to come up with the scheme himself.  Mary is still part of the blame for causing Ruth much anguish while she searched all over Dave and Mary’s property to clear her good name.  No more questions, your honor.  *looks at Dave and mutters* It’s so sad when the wife has to do her husband’s thinking for him.

4 Responses to Mary Larson is at the Witness Stand