Stuff on My Mind: Cover for Forever Yours (Light Modification) and Still Editing

Thanks for all the feedback.  😀  I stayed with the original cover but modified where I put my name and added that it was Dave and Mary’s book. 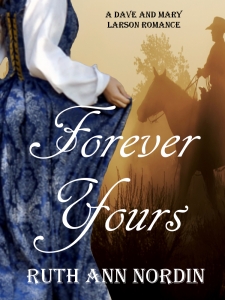 As I’m going through the book, I realize the heroine is one of those women who needs a man to rescue them.  I kept thinking she would stop being that way at some point in the book, but she never did.  So for anyone who likes kick-butt women, she won’t be your cup of tea.  And yes, I really do know women who are just like the heroine in this book, and one is a really good friend.  I love Anna.  She is who she is.  I had no trouble writing her because her personality came through on the first page of the book.  However, I am nothing like her.  LOL  For those of you who read An Inconvenient Marriage, I’m the Sue Lewis of the world, except I don’t like to ride horses.  More power to anyone who does.  I rode a couple horses, never liked it, and almost fell off of one when it darted off (without my command).   Anyway, the last adventure when I almost fell and broke some bones was the last time I ever got on a horse.  Okay, another honest moment.  I don’t have Sue’s startlingly awesome looks either.  But personality-wise, yep.  I’m pretty much the complete opposite of Anna.

I don’t know if anyone else has noticed it, but it seems that the two personalities (Anna and Sue) tend to attract each other.  You have your Type A personality (me) and a Type B personality (the majority of close friends I’ve ever had, including my husband).  I even get along best with my Type B personality kids, and my husband gets along better with the Type A kids.  Being a psychology major (got a degree I have yet to use), personality types fascinate me.

And being a Type A, I would be whacking Citlali over the head with my purse to knock some sense into him if I was Onawa, but Onawa’s a Type B so she doesn’t, though I will say she comes to the point where she says “enough is enough”.   Speaking of Onawa’s book…

Which brings me to an important point:

Hmm…  I was just thinking of how strange it is that I wrote about two Type A’s that managed very well together: Jake Mitchell and Sue Lewis from An Inconvenient Marriage.  I don’t often mix characters that way–one is usually a Type A and the other a Type B (out of instinct), but hey, if it works, go with it, right?  😀

10 Responses to Stuff on My Mind: Cover for Forever Yours (Light Modification) and Still Editing