As promised, I’m going to discuss why I went with the ending I did for Loving Eliza. 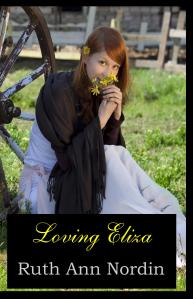 I decided not to give John and Eliza a biological child because someone I know struggled with infertility.  The truth is, not every couple can have children.  While most couples will conceive, there are some who won’t.  It’s heartbreaking for them.  I wanted to give them a heroine and hero who also couldn’t have a child.  I got some criticism for not allowing them to have the child, but really, it worked out best that way.

I knew when I ended the book without a biological child, I would have them adopt a boy who was abandoned.  But the question was, who was this child going to be.  Given the fact that John was mute, I wanted a child who also had a disability, something that would compel his parents to abandon him.  I chose a blind boy, and this boy became Brian who was the hero in Bid for a Bride.

The initial challenge was how Brian and John would communicate since Brian wouldn’t be able to see the signs John used, but then I remembered the movie I watched about Helen Keller’s life.  Helen was blind and deaf.  In the movie, she learned how to sign by feeling her instructor’s hands.  That’s what gave me the idea to have Brian and John communicate through touch.

Ruth Ann Nordin mainly writes historical western romances and Regencies. From time to time, she branches out to contemporaries romances and other genres (such as science fiction thrillers). For more information, please go to www.ruthannnordin.com or check out https://ruthannnordinauthorblog.wordpress.com.
View all posts by Ruth Ann Nordin →
This entry was posted in Loving Eliza. Bookmark the permalink.

10 Responses to Inspiration For the Book: Loving Eliza’s Ending