This scene comes from the wedding night.  Catherine (our heroine) has waited for Ethan (our hero) to come to her bed.  However, he doesn’t come, and this makes our heroine rather…miffed (to put it nicely). 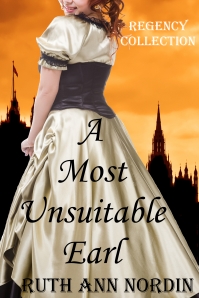 Here’s a sample from the scene:

She was sure he would come to her bed before midnight.  But when the clock chimed one, she let out a huff and threw the covers off of her so she could cross the room and go to the door connecting their bedchambers.  He better not be out with someone else tonight!  It was bad enough she had to marry him, but to be deserted on her wedding night in favor of another bed partner made her blood boil with rage.  Of all nights, this was the one reserved for her.  Her resolve strengthened, she flung the door open and entered his room.

To her surprise, he’d been asleep.  He bolted up in his bed, his hair ruffled and his eyes wide.  “I don’t want to fence!” He blinked in the moonlight and rubbed his eyes.  “Where am I?”

“I…uh…” He blinked several more times and stared at her.  “I didn’t think you’d want me to be with you tonight.”

What did her wants have to do with anything?  Her duty was to give him an heir.  Exasperated, she sighed. “When were you planning on coming to my bed?”

She placed her hands on her hips and glared at him, but the effect was probably lost on him since it was dark and he couldn’t see much of her.  Inspired, she went to his table and lit a candle.  There.  Now that he could properly see her disgust, she hurried back over to him and glared at him once more.

He rolled his eyes.  “I was doing it for you.  I thought you wouldn’t want me in your bed, given how much you loathe me.”

“This has nothing to do with how I feel about you.”

He groaned and placed his head in his hands.  “You sound just like my mother.”

Too annoyed to be nervous, she grunted and pulled her shift off.  “I don’t care if I sound like her or not.  We’re going to get this over with.” She picked up his covers and nudged him in the side.  “Move over so I can get in.  I’ll go back to my bed once you’re done.”

Ruth Ann Nordin mainly writes historical western romances and Regencies. From time to time, she branches out to contemporaries romances and other genres (such as science fiction thrillers). For more information, please go to www.ruthannnordin.com or check out https://ruthannnordinauthorblog.wordpress.com.
View all posts by Ruth Ann Nordin →
This entry was posted in A Most Unsuitable Earl, Sunday Story Sample. Bookmark the permalink.

7 Responses to Sunday Story Sample: A Most Unsuitable Earl