Deleted Scenes: Falling In Love With Her Husband

Falling In Love With Her Husband went through many revisions, and I deleted parts of scenes and revised others. 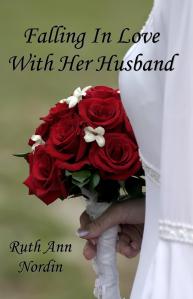 This is part of a scene I deleted.  It takes place shortly after Alex and Agnes got married and came to visit Todd and Ann.   They’re eating supper, and Ann learns that it was Todd (not Alex) who played all those pranks on her while they were growing up.  They are talking about the first chapter of the book where Ann ran after Alex for throwing bugs at Abigail and Lucy (Todd’s sisters).  (The revised version of this scene takes place in Chapter 27.)

Original (Deleted) Version: The original version was in Ann’s point of view, and this is given in the first person point of view.

“And it’s also nice to find out you weren’t going to shoot me after all,” Alex said.

“You threw ants on me and hit me with a broom.  I didn’t know what to expect.”

I could tell he was joking, so I decided to play along.  “I only did that because you were pulling your silly stunts.”

“I always thought the broom incident was too much, Ann” Agnes replied with a grin.  “What lengths you wouldn’t go to so Alex would leave your friends alone.”

“I didn’t even throw those bugs on Abigail and Lucy.  Confess, Todd.  It was you.”

“Yes, it was.” Todd looked at me.  “It’s too late for you to get rid of me now.  We’re married and you’re carrying my child.  Since you’re stuck with me, I can admit the truth.”

I shook my head.  “I wondered about that when you told me about the squirrel.”

Alex wiggled his eyebrows.  “So if you want to grab a broom, I’ll hold him down.  We can make up for the grievous injustice.”

“Wait a minute.” Todd held his hands up.  “It’s all in the past.  There’s no use in worrying about it now.”

“I don’t think so, Todd,” Alex argued.  “Ann, did you know that Todd actually told me if I did another prank when you were around, he wouldn’t talk to me anymore?  He would have done it too.  But I didn’t instigate the pebble incident or that time with the bugs at his house.  I was unfairly accused.  And,” he turned to Todd, “you would have been to blame for my losing a friend.  Why would you keep doing that stuff when Ann was opposed to that kind of thing?”

“Because she fought back,” Todd replied.  “It was fun to watch her go after you.”

“That was mean, Todd,” Agnes spoke up.

He rolled his eyes.  “All you and my other sisters could do was scream and cry to Mother and Father.  What fun was that?  At least Ann had the courage to go after us.  Or rather, Alex.”

“So what you’re saying is that Alex wasn’t annoying after all.” I narrowed my eyes at him.

Agnes stood up.  “You framed my husband and you have the audacity to act proud about it?”

Alex stood up.  “What kind of friend were you anyway?”

“Do I really know you?” I asked, joining them.

He glanced at us.  “You’re kidding right?  I mean, we’re talking about something that happened a long time ago.”

“I’ll hold him down,” Alex said and lunged for him.

Todd easily dodged him and ran out of the kitchen.  Alex quickly darted out of the room, and Agnes followed him.  I ran to the closet and grabbed the broom and ran after them.  I saw that Alex and Agnes had Todd pinned to the floor.

“Ann, don’t do anything rash,” Todd protested as he struggled to stand up.  “Remember that I was willing to give up Alex for you.”

“That makes it even worse, you traitor,” Alex protested, though he grinned.

I calmly walked over to Todd, holding the broom in my hands.

Todd stopped struggling.  “Do your worst.  Alex is right.  I brought this on myself.  You just looked so beautiful when you were upset.  I loved you so much.”

“Really?” I was pleased.

“But he did do it out of love.” I set the broom down and kissed him.  “Isn’t he wonderful?”

Alex grunted.  “You never liked it when I did pranks but he does them and you think he’s wonderful?”

“Well, he always was better looking than you.”

“I can tell when I lost.” Alex reluctantly let Todd go.

“But I do owe you an apology,” I told Alex.  “I’m sorry for throwing ants on you and hitting you with a broom.”

“That helps,” he replied as Todd leapt off the floor.  “But this makes me feel better.” He picked up the broom and chased Todd out of the house.

Agnes giggled as they ran to the barn.  “Who do you think is going to win?”

“Todd, of course.  He’s always been one step ahead of Alex.”

Ruth Ann Nordin mainly writes historical western romances and Regencies. From time to time, she branches out to contemporaries romances and other genres (such as science fiction thrillers). For more information, please go to www.ruthannnordin.com or check out https://ruthannnordinauthorblog.wordpress.com.
View all posts by Ruth Ann Nordin →
This entry was posted in Uncategorized and tagged Falling In Love With Her Husband. Bookmark the permalink.

4 Responses to Deleted Scenes: Falling In Love With Her Husband