Inspiration Behind the Book: Shotgun Groom…And a note on the where ideas for other books come from

Shotgun Groom was inspired by one scene that happened in The Wrong Husband.  As soon as I wrote it, I knew exactly how Joel would get married.  The scene took place in Chapter 21.  It was after Owen defeated Big Roy and became the official deputy. 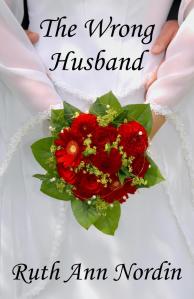 It was about time Jenny’s brothers stopped their harassment, Owen thought.  Owen’s chest puffed up with a sense of pride as he closed the door of the jailhouse and placed his hat on his head.

“Afternoon, gentlemen,” he said and buttoned his coat.  “Getting ready for Christmas?”

“We had some errands to run,” Tom replied.  “Even if women say they don’t want anything but our love, they don’t mean it.”

Joel snickered.  “And you had to learn that the hard way.”

Tom’s face grew red.  “I can’t wait until you get married, Joel.  I don’t care what you argue about.  I’ll take her side each time.”

“Unlike you all, I have no desire to tie the knot,” he replied and gave them a smug smile.  “I’m going to stay single forever.”

“Since I saw how you all ended up.  No woman is going to tell me what to do.”

It was a subtle slip which went into the conversation, but it was enough to inspire Shotgun Groom.  I enjoy working with Tom and Joel.  They’re my favorite characters to put together in a book because of their good-natured banters.  The banter didn’t truly start until I wrote “A Bride for Tom,” which was written after Eye of the Beholder.  The Nebraska books are ones that I can’t write in order.  They need to be written when the characters are ready.  Part of it is because there are so many characters I plan to write about in the collection.  I figure I have at least twenty more ideas.  I don’t know if I’ll ever write all of the books that are meant to go with that world, but I’ll have fun trying.  😀

Inspiration comes from a wide range of sources.  Last week, I talked about how a dream inspired Bride of Second Chances.  Other sources of inspiration can come from movies, a conversation with a friend, overhearing another conversation, browsing titles in a bookstore or online, seeing a picture (they say a picture says a thousand words), reading a book and wondering “what if this happened instead?”…

Most of my ideas come when I’m writing.  I’ll write a particular scene (like the one above) and think, “Ah ha!  I can go somewhere with that.” I’d say 90% of my books stem from what I wrote in a book prior to that.  Quick examples: Falling In Love With Her Husband gave me the idea for An Inconvenient Marriage (because I wondered what would happen if I paired up a hero and heroine who didn’t want to be together).  Loving Eliza was inspired when I wrote the scene between Eliza and Neil in His Redeeming Bride.  I wrote “A Chance In Time” because I enjoyed the romance between Cole and Penelope in Meant To Be and wanted another view of it.  From “A Chance In Time” came Restoring Hope, which in turn, led to Brave Beginnings and Bound by Honor Bound by Love.

There are many other examples, but I won’t bore you with all the details.  Suffice it to say, the more I write, the more ideas I get.  I used to think that there was a limited vault somewhere in my mind where I could access ideas from.  And I believed once I used up my ideas, I would stop writing.  Back in 2008 when I wrote An Inconvenient Marriage, An Unlikely Place for Love, and The Cold Wife, I thought I was done with romances and would go back to writing fantasy (mainly the Raz books I had done prior to 2008).

But then I got the idea for Eye of the Beholder (because I wanted to read a mail-order bride story but didn’t find any that fit the plot I wanted where the heroine wasn’t drop dead gorgeous).  As I wrote that book, I realized I wanted to write a ton of books based on the secondary characters.  I wanted to know how Tom and Jessica ended up together, I wanted to give Neil a second chance, I wanted to see Jenny married to a good man after the trouble she had with Clyde.  Other ideas came later, but now you know why “A Bride for Tom,” His Redeeming Bride, and The Wrong Husband were written shortly after Eye of the Beholder.  From those three books came more ideas.  It snowballed and the Nebraska Collection grew bigger and bigger.

The concept of a limited vault of ideas is false.  The truth is, the vault has no limit.  Ideas pour out of it, and the problem is which idea to write next.  At any one time, I have ten books I’d like to work on right away, but I have to pick which ones to go with.  It’s hard to make the decision.  I end up making the decision based on how eager the characters are to tell me their story, how much interest their is in the story from you guys, and what other books I’m working on at the moment.  Sometimes I need a break from one sub-genre.  If I just got done doing a lot of historical westerns, I’ll go to a contemporary or Regency.  This is why I can’t just write one sub-genre in romance.  I need a variety to keep my mind fresh.

Ruth Ann Nordin mainly writes historical western romances and Regencies. From time to time, she branches out to contemporaries romances and other genres (such as science fiction thrillers). For more information, please go to www.ruthannnordin.com or check out https://ruthannnordinauthorblog.wordpress.com.
View all posts by Ruth Ann Nordin →
This entry was posted in inspiration for the book, Shotgun Groom, The Wrong Husband. Bookmark the permalink.

4 Responses to Inspiration Behind the Book: Shotgun Groom…And a note on the where ideas for other books come from