I’m finally getting around to posting the rest of the pictures I took at the RT Booklovers Convention.  I was going to dedicate one post to each person, but at the rate I’m going, I’ll never post all the pictures I got before the year is up unless I do it in one post.   🙂

I’m going to do this in alphabetical order: 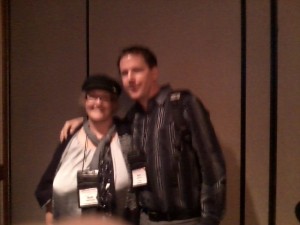 Unfortunately, this picture is blurry.  😦  I know.  What a bummer.  But this really is me and Mark Coker, the founder of Smashwords.  I didn’t even know he was going to be there until I sat down to read who the speakers were going to be at the convention.  I met him the year before at the Nebraska Writers Guild at Mahoney State Park in Nebraska but didn’t have a camera with me at the time, so I managed to get one this time.  Even if it’s not that clear, at least it’s a picture.  🙂  And he is a really nice person who is down to earth and does everything he can to help others. 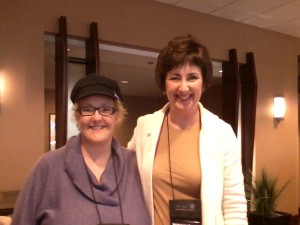 Pam Crooks is a sweet, energetic and fun author of fourteen historical western romances and a romantic suspense.  She has a pen name, Frankie Astuto, for historical suspense novels.  She’s been traditionally published with Dorchester Publishing and Harlequin Historicals in addition to self-publishing some titles.  The trend is becoming more common for authors to be hybrid authors, going traditional publishing and self-publishing.  I haven’t read it yet, but I did pick up Her Mother’s Killer because I thought it’d be fun to read a romantic suspense for a change.  I don’t usually read those.  I did get The Spyglass Project for my husband since he loves the era it takes place in (the 1920s).

Most of you recognize Rose Gordon’s name because you know I fell in love with her books when I started reading them back in 2011.  I didn’t realize I had conversed with her until I picked up Liberty for Paul.  I enjoyed that book so much, I looked for other books she’d written and at the time, it was the first one in the series (Intentions of the Earl).  I read the Scandalous Sisters Series before I really got a chance to know her.  Over the years, we continued corresponding via email and finally got a change to meet in person at this convention.  She’s a very sweet and generous person, and in case you’ve read her blog and books, you know she has a great sense of humor which is how she is in real life.  She had me in stitches over her comment to my friend Janet Nitsick over how one of Janet’s kissing scenes (which was very tame) in her book “scandalized” her.  I still laugh when I think about it.  Considering Janet writes clean romances and Rose and I don’t, you have to understand the context of Rose’s joke.

On a quick note, Rose generously gave me three copies of every book in her Banks Brothers Brides Series for the giveaway that Janet and I are doing (along with Melanie Nilles’ two contemporary romances) next month.  Rose also offered some swag.  (Swag is stuff like bookmarks that goes along with the books.) 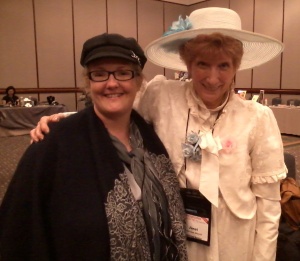 I’m sure you recognize Janet Nitsick’s name too since I mention her quite a bit.  Since we live in the same town, it’s easier (and more fun) to pull our resources together and do giveaways together.  This way when we’re sending out the books and (sometimes) other gifts, we also get a chance to socialize.  Everything is better when you get to do it with someone you like being with.  Yes, we go to conventions together for the same reason: it’s more fun to go there when you have a good friend with you.  And ironically, she and I see eye to eye on a lot of things, so when one of us says something, it’s usually what the other is thinking. 🙂

In the picture above, Janet is wearing an authentic early 20th century wedding dress.  Oh, and though it’s hard to tell, Rose is wearing a Regency dress in the picture I had taken with her.  Some authors got dressed up in outfits that fit their books, which I thought was neat.

I still remember the first book I read by Cheryl St. John, and though I’ve read and enjoyed others she’s written, His Secondhand Wife.  It’s probably my favorite because it’s the book that introduced me to her.  She’s got a huge backlist of romances, some historical and some contemporary, but all of them beautiful.  I had the privilege of meeting her at a local Romance Writers of America chapter, and I’ll admit it was intimidating to meet someone whose books I’d seen in bookstores and libraries and enjoyed.  I’ll also admit that when she was in one of my critique groups (it was once and at one of the RWA meetings), I was nervous because I was new to writing romance and she was well established, but she was very helpful and encouraging.  Like Tiffany (below), she helped me get in touch with my author’s voice with her comments.  She also critiqued a short story I had submitted to the group (the project was later abandoned), but her honesty and kind way of explaining how I could make my work better helped me a lot.  She has a big heart and is quick to support others.  Since I’ve been seriously writing now for five years, I’m more comfortable meeting other authors, but it’s still a thrill to meet them, and I was excited to get a picture with Cheryl.  🙂

I did meet Ann Stephens before this convention.  We have talked at the Nebraska Writers Workshop and the local Romance of America Writers’ chapters in Nebraska.  As ashamed as I am to admit I have not read her historical romances (To Be Seduced and Her Scottish Groom) yet.  However, I did buy them so they will get read, so I will read them this summer.  I have seen samples of her work and she has a compelling and I love the plot lines of her novels (marriage of convenience and marriages that are done to avoid something like a scandal).  She’s really awesome.  Friendly, encouraging, and cheerful.  She’s critiqued one of my chapters and she has terrific input (meaning, she has a great eye for effective storytelling). 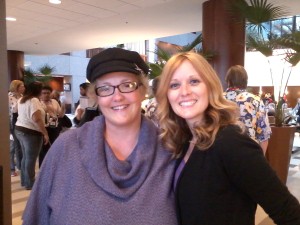 I don’t remember when I met Tiffany online, but it was before she and her sisters got popular with their Tifferz & Her Sisterz Books Reviewz blog.  Tiffany is such a sweetheart.  She helped me with some of my books through beta reading, helping me better my storytelling (something very important after I came out of a writer’s critique that hindered my author voice).  She helped me find my author voice again and gave me confidence to write my books my way instead of the way some other writers wanted me to write them.  A world of thanks to you, Tiffany!

Those are the pictures I got.  I was nervous about asking to take pictures with everyone I did, but they were all more than happy to do it.  So my thanks for everyone who let me get pictures with you!  I’ll have to update my website so I can brag.  I’ve always wanted to have a page on my website featuring me with other authors and people who’ve enjoyed my books, so this is going to be exciting!