Dave Larson: The Most Loved Hero of All Time

I guess it doesn’t come as a surprise that Dave Larson won the poll I ran a long time ago.  At least it seems like it’s been forever since I ran the poll back on August 11.  I can’t believe it was almost a month ago.  Anyway, 80% of the votes went to Dave.  He also won when he was in a poll I ran way back when between him and the other heroes in the Nebraska Historical Romance Collection.

I think it’s safe to say that of all the heroes I’ve written, Dave will always be the favorite. 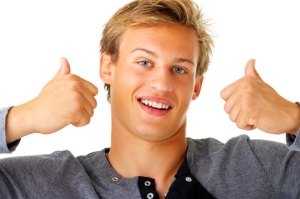 Dave Larson: Now Officially The Best Hero of All Time

While his ego was big before, I’m afraid now it might explode.

Dave Larson: Don’t be ridiculous.  My ego won’t explode.  However, now I have an even better reason to come to you with a letter–

Ruth: Of your demands?

Dave: No.  It’s a letter to acknowledge my status as the best hero you’ve ever written.

Ruth: I fail to see the difference since there’s bound to be a demand or two in it.

Ruth: Well, sometimes I do manage to make people laugh.

Dave: I hate to say it, Ruth, but this isn’t one of those times.  However, this isn’t why I’m here.  I came here to read my letter.

Dave: To everyone who voted for me, I extend my deepest thanks.  To those of you who didn’t, I’ll assume you really did but there was a glitch in the system that made it seem as if you voted for someone else.

Ruth: *snorts* You wish.  Maybe the glitch made it seem as if people voted for you when they didn’t.

Dave: Anyway, as I was reading…  I think this historic moment–

Ruth: One would hardly call a poll voting on heroes historic, Dave.

Dave: When you are a character, it’s all you have.  Now let me continue.  I think this historic moment should send the author a clear message, and that is that people want to see more of me–

Ruth: What did I say about the ego, guys?

Dave: You didn’t let me finish.  I was going to say “people want to see more of me and Mary” to the end of that sentence.  We all know without Mary, I would not have been the kind of hero I am.  She brings out the best in me.

Ruth: I won’t argue that one.

Dave: Why do I sense a subtle putdown in that comment?

Ruth: *widen eyes innocently* I was only agreeing with you.

Dave: *not looking convinced but turns back to his letter* That all being said, I can’t help but wonder if there will ever be a third book.  Will Forever Yours ever be written?

Ruth: That all depends on you, Dave.

Dave: Me?  I’ve been wanting you to write this book ever since you finished To Have and To Hold.

Ruth: That might be true, but you’ve never told me what the first chapter of the book should be.  I can’t write anything if I don’t have at least the first scene in place.  As it is, my mind is blank.

Dave: But you have other scenes in mind.

Ruth: True, but I don’t have the very first scene, Dave, and that’s the most crucial scene there is when it comes to starting a book.

Dave: Can’t you start the book at chapter two and go back to chapter one?

Ruth: No because chapter one might change the rest of the book.

Ruth: I can’t explain it, but as soon as I start the first scene, the story takes on a life of its own.  I’ve tried outlining, plotting, and writing ahead.  None of those work for me.  I have to start the book and let it evolve.  Did you think you were the original hero I intended for Eye of the Beholder?  Nope.  In the beginning, it was supposed to be Neil Craftsman.

Dave: But that would have been horrible.

Ruth: Well, not really.  Originally, Neil was supposed to be a good guy.  But as I was writing the story, I thought it would make more of an impact if the man Mary came to marry rejected her.  So I needed the man who would marry her instead and you were created.

Dave: Even if Neil was the good guy, he wouldn’t have appreciated her as much as I do.

Ruth: We’ll never know because it didn’t happen.  So you need to tell me what’s in the first scene before I can write Forever Yours.  The ball is in your court, Dave.  🙂

2 Responses to Dave Larson: The Most Loved Hero of All Time