I finally got the description for Ruined by the Earl, and here it is…

After losing all of his money in a reckless bet, Logan Breckman, the Earl of Toplyn, needs to marry a lady from a wealthy family–and fast. So he does the only thing he can think of and picks one at random to trick into marriage.

Unfortunately for Miss Melissa Jasper, she happens to be in the right place at the wrong time. Before she knows it, he comes up to her carriage and kisses her…and she is doomed. Now she can’t marry the gentleman she was hoping to and she’s bound to a cad who thinks of little else but himself.

Logan is the first to admit he’s far from perfect, but being with a gentleman who knows how to ignite a passionate spark is a lot better than being stuck with one who’ll put a lady to sleep. Of course, she won’t thank him for forcing her hand in marriage yet. But he has no doubt that sooner or later, she’ll come to understand he’s the best thing that’s ever happened to her.

Melissa: Who wrote that garbage?

Melissa: Of course, I am.  It’s filth.  I mean, read it back to yourself.  “Sooner or later, she’ll come to understand he’s the best thing that’s ever happened to her”?  It’s garbage.

Logan: What’s wrong with that?

Melissa: It makes me seem weak, like I should be falling at your feet in utter adoration and thanking my lucky stars that you chose me, of all ladies, to bless with a kiss.

Logan: There’s nothing wrong with that.  In fact, it’s perfect.

Melissa: It’s not perfect, you cad.  It’s awful.  I will never, ever, fall at your feet in adoration.  In fact, I’ll never be glad I had to marry you.  I’m going to mourn the loss of my happiness every day for the rest of my life. 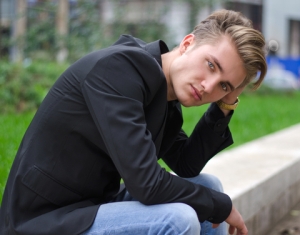 Logan: I don’t understand why.  I’ll make an ideal husband.  I fully support a lady who speaks her mind, and I don’t take myself too seriously as some stuffy gentlemen do.

Malcolm: Is that “stuffy gentlemen” comment directed at me?

Logan: Who else would I be talking about?

Malcolm: Words cannot describe how much I hate you.

Logan: Good.  Then don’t try.  There’s no reason for you to be here.

Malcolm: You kissed my sister at Lord Roderick’s ball without having the decency to even find out if she was already in love with someone or not.

Logan: I didn’t have time to go around asking something like that.  Time was of the essence.  I had to secure a betrothal right away.  Melissa just happened to be there.

Melissa: You don’t even care about me. Why would I ever be glad to be married to you?

Logan: You have it all wrong, my joyful tulip.  I cared about you.  I’m very happy you’re a beautiful lady.

Melissa: Is that all you care about?  How I look?

Logan: Well, it does make getting the heir a lot easier if I’m attracted to you.

Malcolm: Duel!  I demand a duel a once.

Logan: Don’t be silly.  A duel will accomplish nothing.

Malcolm: It’ll get you out of our lives, you pathetic slug.

Logan: Was “slug” a word back in Regency times?

Malcolm: What do you care about a word’s origin?  You’re wearing modern clothes with a modern hairstyle.

Logan: You have a point.  I offered to come on here naked so I could fit in with the Regency time period.  People look the same regardless of the time period if they don’t wear any clothes.  However, Ruth was surprisingly against it, so I came in clothes.

Ruth: I want to keep this blog PG, Logan.

Logan: Which is a shame.

Malcolm: No, it’s not.  None of us want to go blind from looking at you without clothes on.

Logan: You’re just upset that I’m better looking than you.

Malcolm: That has nothing to do with it at all.  It has to do with what’s decent and right, and you, my lord, are none of the above.

Logan: Hmm….  I’m pretty sure “none of the above” is a modern expression, Malcolm.  You might want to rephrase that.

Malcolm: A duel!  I demand a duel!

Melissa: Who cares what words were said back in the Regency time period or not?  My life is about to be destroyed.

Lord Waxman (according to Logan)

Logan: It would only be destroyed if you actually married this ultra-dork. *snickers as he puts up the picture on the left* And yes, I know no one said “ultra-dork” back then, nor did they wear those clothes.  But trust me, this is what Lord Waxman is like.  See why I need to save the fair and enchanting Melissa?

Melissa: *takes out her handkerchief* My life is over.  There is no point in going on.

Malcolm: Melissa, I’ll figure a way out of this.  Somehow, we can get you out of this marriage.

Logan: You can try, but it won’t work.

Malcolm: Oh, shut up.  No one wants you here.

Logan: That’s not true.  I overheard Ruth saying I’m her favorite Regency character.  In fact, she even added that out of all the Regencies she’s written, Ruined by the Earl is her favorite.

Ruth: That is true.

Malcolm: Have you no sense of decency, Ruth?  I don’t think I will be a hero in one of your upcoming Regencies when you work on your next series.

Ruth: But we already signed the contract.  Your book is going to be in the Marriage by Arrangement series.  I don’t know which number in the series it’ll be yet.  You need a wife who’ll loosen you up.  You’re much too stuffy.

Logan: *shoots Malcolm a pointed look*  See?  Even she thinks you need to relax.

Malcolm: I can tell when I’m not wanted.  Come on, Melissa.  We don’t need to put up with this.  This book will not end up with you and Logan “happily married” as Ruth claims.

*Malcolm and a crying Melissa leave*

Logan: It does end up with me and Melissa being happily married, doesn’t it?

Ruth: It’s a romance, Logan.  All romances have a happy ending.

Logan: That’s good.  I’d hate to think Malcolm would really be stupid enough to challenge me to a duel.

Picture credits (I bought these off Dreamstime.com):

Ruth Ann Nordin mainly writes historical western romances and Regencies. From time to time, she branches out to contemporaries romances and other genres (such as science fiction thrillers). For more information, please go to www.ruthannnordin.com or check out https://ruthannnordinauthorblog.wordpress.com.
View all posts by Ruth Ann Nordin →
This entry was posted in character interview, Ruined by the Earl. Bookmark the permalink.