Questions for the Larsons: Part 1

To celebrate the fact that Richard Larson finally got his own book, I asked if anyone had anything they’d like to ask any of the characters from Wagon Trail Bride (or the Nebraska Series).  Thanks to everyone who responded. 🙂  You guys are awesome!

The answers ran longer than I expected, so I had to break the questions into two parts.

Miriam says: “I loved Richard, and he’s a very closed second, but Dave is still my fav :). I would like to ask Dave, who is his favorite brother and why?” 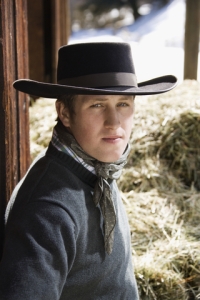 Dave says:  First, I want to thank you for having such great taste in heroes, especially when it comes to liking me best. 😉  Hmm…  my favorite brother.  I guess it would be Richard.  Tom and Joel argue all the time. It was a pain listening to them try to outwit each other.  You’d think once they grew up, they would stop, but they didn’t.  In fact, it’s only gotten worse.  I know.  It’s hard to believe two grown men can act like children, but it’s how they are.

Amanda says: These two (Richard and Dave) have hearts of gold. Both attributed from their parents. Oh I would love to hear about their upbringings. 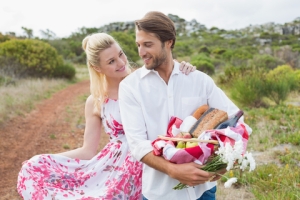 Ma and Pa Larson (I have a feeling I named Pa Larson in one of my books, but I can’t remember what it was)

Ma Larson says: When you have six children, you have to manage your home efficiently.  The oldest are naturally given the most work because they can handle the work load more than the younger ones.

Pa Larson says: She’s right. She ran a tight ship, especially when we were living in the apartment while in New York.  We were all cramped into a small space, and the only time we got a reprieve was when the ones old enough to play outside were throwing ball or playing tag out in the street.

Ma Larson: Don’t think we weren’t responsible parents.  We were.  Back then there weren’t cars zooming up and down roads.  You just had to worry about horses, and those weren’t often passing by.  Most of the time, people walked when they had to go somewhere.  It was a safer time.  You could let your children run around outside all day and not worry someone would kidnap them.

Pa Larson: You could also leave your door unlocked.  Sure, there were some bad people.  Every generation has them, but it’s not like it is in the 21st century.  In my opinion, this was a great place to raise kids in.  They got to run around all day when they weren’t in school, and then they were so tired, they fell asleep right away.  Richard was the only one old enough to work after school in the factory to help make ends meet.  Back then the average wage was $16 a week, so by the time we were done buying food and other necessities, we barely had enough for rent.  Having eight people in one household isn’t cheap.

Ma Larson: But it was worth it.  I wouldn’t trade it for anything.  But to be fair, it was harder on him than it was on me.  At least, I had Sally’s help with her younger brothers and sisters during the days they were home.  He worked twelve hour days in the meat factory, six days a week.      Women back then stayed home and raised the family while the men worked.  It was rare to hear of a woman working.  So the children didn’t see their father a lot until we made the move to Omaha.

Pa Larson: After we moved there, they had to help out with the farm.  Honestly, I was just as busy as I was in New York, but I loved being outdoors.  Richard was already grown up by then so he didn’t to experience the farm life like the others did. Tom and Dave loved it. They were quick in learning how to plant and reap crops and tend to the animals. Joel, however, was harder to get motivated.  I found him on several occasions tricking Tom into doing his chores for him.  Dave was always too smart to fall for Joel’s tactics.  Sally and Jenny also helped out, but most of the time, they helped their mother in the house.  Believe me, cooking for four hungry men isn’t an easy task.

Catherine says:  I’d like Dave to talk about his memories from the wagon train and also how he feels about each of his children leaving the nest and his and Mary’s role as grandparents. 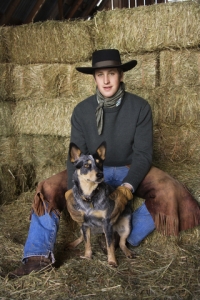 Dave discusses his thoughts about the wagon trail: The days on the trail were mostly a blur.  We got up right at dawn.  I’d take turns with Tom and my father in feeding the animals.  Joel was supposed to help out, but he was often nowhere to be found when there was work to be done.  Sometimes he’d “help” our mother with the cooking or say he had an upset stomach.  At other times, he hid in the wagon so no one could find him.  But every time–and I mean every single time–he’d pop out and eat everything on his plate with surprising gusto, even when he claimed the stomach ache.  I think the reason our mother put up with it was because he was the baby of the family.  I swear, the youngest can get away with anything.

Anyway, once we were finished with breakfast, we’d hitch up the oxen and head on out for the day.  We averaged anywhere from 10 to 15 miles a day, depending on the weather and how well we were all doing.  If someone got so sick they couldn’t keep going, we all had to stop.  No one was to be left behind.  There is safety in numbers, so we stayed together, even when some wanted to leave others behind.  Joe Otto was determined everyone arrive safe and sound to Omaha.

During the day, we’d take breaks to let the animals rest, get some water, and eat a snack.  But we didn’t eat a whole meal again until evening when after we set up our things for the night.  Believe me, when it came time to sleep, we did so–fast.  Even Joel, who did the least amount of work possible, fell asleep right away.  There was one time I put a snake in Joel’s bedroll, just because I had enough of him getting out of doing so much work.  *chuckles* To this day, he thinks Tom was the one who did it.

Dave discusses being a grandparent: Grandchildren are great, but I don’t remember getting old enough to have them.  I feel like I’m still in my 20’s, and I can remember the day I met Mary as if it were yesterday.  The older you get, the faster the time seems to pass you by.  It was strange to hold my first grandchild for the first time.  I couldn’t help but remember the day Isaac’s was born.  It’s funny how something like seeing your grandchild for the first time can take you back to when you first held your child, but that’s how it is for me every time a new one is born.

Mary does the hard work with them.  She’s always done the hard work with all the children we had, and she does it with the grandchildren, too.  I’ve been on my own, and I remember how much work it was to maintain a home, cook, and do laundry.  It’s a lot harder than it looks.  I take the grandchildren out in the barn and teach them to milk cows and ride horses.  Sometimes I take them planting, just in case they want to farm some day.  So really, my part in the whole thing is to simply enjoy them.

I’m going to end the questions here because I’m at 1300 words for this post.  I’ll work on answering the others in the next week or two. 😀

Ruth Ann Nordin mainly writes historical western romances and Regencies. From time to time, she branches out to contemporaries romances and other genres (such as science fiction thrillers). For more information, please go to www.ruthannnordin.com or check out https://ruthannnordinauthorblog.wordpress.com.
View all posts by Ruth Ann Nordin →
This entry was posted in Uncategorized. Bookmark the permalink.
Loading Comments...
%d bloggers like this: