The author I mention above is me. 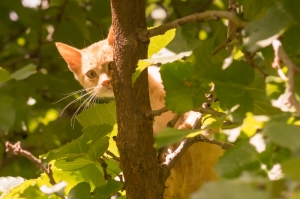 The other day, I was reading a book on book promotion, and while doing better covers, book descriptions, keywords, and such are doable on my end, I hit a brick wall when the author mentioned frequent emailing to people on my email list.

Unless I have a new book out, I honestly don’t know what to say. Even when I write a blog post or post something on Facebook, I have a terrible time coming up with something I think might be of interest to people. I personally know authors who write about their personal lives in a way that is so interesting I have to read each and every word. Also, there are authors that come up with great topics, and they make these topics sound much more interesting than I ever could. They have such a gift for these things, and I can see why they attract a lot of people.

Unless I’m writing a story, my mind goes blank on coming up with anything that sounds fresh and exciting. It’s like when I write Christmas letters. I hate doing them. In fact, I broke down and ended up just sending cards with a sentence or two because it didn’t seem like anything that interesting happened in my life. Things just seem to be business as usual. Probably the biggest news I had over the past few years was moving, and that didn’t take long to say. Other than that, not a lot has changed in my life.

This must be a personality thing. Some authors are great at social mingling. I’m not one of them. If we were all at a party, I would be the person sitting in the corner of the room talking to maybe one or two people. No one would notice me. I know this because in real life, I’ve never been the center of attention. I’m a socially awkward person. You know those people who try to tell a joke but no one thinks it’s funny? That’s me. It’s not that I don’t have a sense of humor. I manage to write some funny lines in my books, but in real life, I just can’t seem to do the same thing. I know because when I’ve tried to tell jokes, my family (even my kids) look at me in sympathy. They want to laugh, but they can’t manage to bring out a chuckle.

I think the “email and engage your list frequently” thing is great for people who have a natural charisma. They’re often the leaders. They go up to people and make them feel comfortable. I’m the type of person who follows. I’m much more comfortable responding to a thread or topic someone else started.

So, after doing some thinking over this, I realized something very important. Authors can’t all promote the same way. It’s impossible. Some just don’t have the personality for being entertaining in emails. The best way I can possibly entertain in an email to my email list is to say, “Here’s my book, and here’s a special scene or research I did to go with it.” Those things take me a week to come up with. I spend a lot of thought on them. So it’s not that I don’t care about the people on my email list. I do. I care about everyone who’s still with me, and I don’t take them for granted.

So even if I don’t email until I have a new book out, I hope you know it’s not because I’m not thinking of you or that I don’t care. I do think about you guys, and I do care. Whether you’re following this blog, on my email list, following my newsletter blog, friended me on Facebook, or are following my Tweets, in the back of my mind, I do think of you.

I know we’re told that we must break out of our comfort zones, but sometimes that’s not good advice. I don’t care how many lessons I take on public speaking. I am not going to be good at speaking in front of an audience, and I’m not about to go through it again after failing two times. Thankfully, Janet Syas Nitsick was there to save me from total embarrassment. I was so stressed out over those times that I was physically sick for a almost a week. I would much rather be in a group and participate than be the leader at the front of the room. So why would telling someone like me to do a speech be good advice? It wouldn’t be. Likewise, emailing every week or two weeks to engage people in a conversation wouldn’t work for me. It would stress me out because I don’t know what to say, and I sure couldn’t keep up the momentum long-term.

I think the most important thing for writers to do is to figure out who they are. What are their strengths and weaknesses? There’s no point in trying to work on a weakness (unless it’s for your physical health). I was weak on eating sugar, and I’ve been cutting it out. So sometimes, it makes sense to do something like that. But if you’re weak at public speaking, why torture yourself doing it? If you’re not good at making You Tube videos (like I am), why do it? If you’re not naturally inclined to engage people in frequent emails to your list, why do it? Also, if you’re not naturally good at writing by the seat of your pants, don’t do it; plot instead.

I think authors should find what they’re strong at and do that. My strength is in participation in a discussion. My strength is in setting down a routine to write and sticking with it. My strength is in sticking with a story I’m writing, even when I get to the middle where ideas start to slow down. I press through it. (I rarely stop writing a story. It’s happened, but not often.) I’m not a sprinter. I am the turtle. I check in almost every day to write, and though I might not write a lot that day, I usually get something done. I do take days off, and those days will be more frequent this summer when my kids are home all day, but I’ll probably still check in to do a few hundred or so words before they get up.

So anyway, after reading that part in the book on promotion about successful authors emailing frequently, I felt bummed out for a couple of days because I knew this was something I just can’t do, but I’ve since come to peace with that. We all have our limitations. Being aware of them can also help us realize we have some strengths that wouldn’t be possible without those limitations. Sometimes you just have to flip something around to see how a hinderance in one area is a strength in another.

I don’t know if this is inspiring for anyone else, but it took a huge weight off my shoulders to realize it’s okay to do things in the way that is most comfortable for us. It’s okay to not follow the crowd and do it their way. Sometimes you just have to be true to yourself.

13 Responses to The Socially Awkward Author