Kidnapping the Viscount is Available! 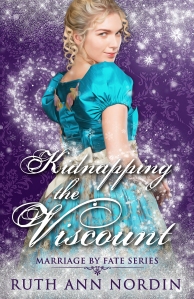 This is the final book in the Marriage by Fate Series.

Here are all the books in the series:

This series wraps up the sub-plot with Ladies of Grace. I transition things from the point where Lady Eloise lost control of the group (in Married In Haste) to when Tara finally gained the advantage (in Kidnapping the Viscount). The group from this point will be much more positive.

I know this is a minor thing, but it’s something I’ve been wanting to get to ever since I wrote The Viscount’s Runaway Bride (Book 1 in the Marriage by Bargain Series). That was the book I introduced Lady Eloise and her group. As a side note, that book is free right now if you would like to see what Ladies of Grace was like in its beginning. Click on this page to get the links. The Viscount’s Runaway Bride is the first book on that page.

Sometimes it can take a couple of series to finally work out everything I had envisioned at the beginning. This is why these Regencies all take place in the same world.

Miss Heather Duff met the love of her life. Then she let him go. And now she’s determined to get him back.

If there’s one thing Heather regrets, it’s that she let Lord Powell go. She listened to other people tell her what to do, so when Lord Powell proposed, she said no. It was the worst mistake she’s ever made, and now she’s determined to prove to Lord Powell that she wants a second chance.

Gill Easton, Viscount Powell, has never stopped loving Miss Duff. But a gentleman has his pride to protect. He can’t just let her walk back into his life as if nothing ever happened. And this puts him in a dilemma.

He’ll have to resort to unusual methods in order to get the lady of his dreams to marry him. In this case, the unusual method is to convince her to kidnap him…without letting her know he’s the one behind the whole scheme.

Don’t miss this romantic comedy featuring a feisty heroine, a hero who has to play hard to get, a meddling brother who doesn’t take even a minute to listen to what someone is trying to tell him, and a friend who doesn’t mind any kind of scandal so long as the cause is true love.

If this sounds like your kind of book, you can find it at these retailers:

10 Responses to Kidnapping the Viscount is Available!