The Outlaw’s Bride is Now Available!

Before I forget, I will be doing trivia on Ruined by the Earl and the books in the South Dakota Series in the next couple of weeks.

With that aside, here’s the information for The Outlaw’s Bride. 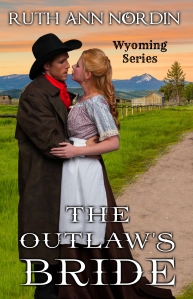 This is Book 1 in the Wyoming Series.

The background to this series is that Charles Gray and his men have stolen Wade Gray’s ranch, killed Wade’s wife, and kidnapped Wade’s son. He also arranged it so that Wade and Mic are outlaws. Charles left Abby alone since she’s a woman, so he doesn’t see her as a threat. Charles, Wade, Mic, and Abby all have the same father, but Charles has a different mother. So they’re all related, and Charles, being the oldest, felt he had the rights to the family ranch. But their father left the ranch to Wade. Wade, Mic, and Abby vow that they will rescue Wade’s child and then they’ll get the ranch back for Wade.

This plot series will be resolved during the course of the series, but it will take three books to complete. I just finished the second book (The Rancher’s Bride) and will start the third book (The Fugitive’s Bride) in the first week of February.

This is where The Outlaw’s Bride comes in:

The Outlaw’s Bride starts a year after the night Charles and his men took over the ranch. Abby gets word in town that Charles is expecting a mail-order bride by the name Lillian Christian, and she hurries to tell Mic and Wade since she doesn’t want to see an innocent woman ending up with him. Mic, who’s been isolated in his hideout, longs for companionship, so he decides he’ll marry her so she has a place to stay. The three, along with Jeremiah (their friend), intercepts the stagecoach before Lillian gets to town.  They are also determined to rescue Wade’s son in the upcoming weeks.

This is pretty much where the book starts, so I won’t go into it any more than that because then we’ll get into spoilers, and there are some people who never read the original version (The Stagecoach Bride). I don’t want to ruin anything for them.

This book is a historical western that shows the gritty side of the wild west, though the books following are more gritty than this one. I haven’t done Book 3 yet, but I expect that to be gritty as well. It does have romance, but it’s also more “western-ish” than what I usually do. I don’t know how to better explain it than that.

If this sounds like your cup of tea, here’s where you can find it:

3 Responses to The Outlaw’s Bride is Now Available!