When Mitch Grady goes to a saloon to help his brother, he finds that his brother’s horse isn’t the only thing being offered in a poker game.  Heather Curtiss’ brother has bet her as well.  Vowing an innocent woman won’t be forced to give up her virtue to a disreputable gambler, Mitch joins the game.  With luck, he wins and frees Heather.

Seeing this as her chance to get away from her brother, Heather appeals to Mitch’s kindness.  She proposes marriage and offers to help him care for two children and his ailing mother.  He accepts, but Heather’s brother hasn’t gone away.  And Mitch might find that keeping her is going to take more than a poker game. 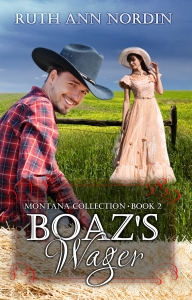 What Boaz Grady wants more than anything else is to have his children living with him.  But in order to get them back, he needs to marry a woman who’ll be their mother.

Eva Connealy left Omaha, Nebraska to be a school teacher.  While in Montana, her stagecoach is attacked, and the men decide to sell her.  While the men in Lewistown post bids for her, Boaz makes a wager of his own and wins the right to marry her.

Despite the shaky beginning, Boaz is sure she’ll adjust to her new life as his children’s mother.  But she wants to be more than a mother.  She also wants to be a wife and vows to figure out how to take their marriage of convenience into something much, much more.

In a daring move, she stages a situation where he must rescue her.  Her ploy works, and she finally has the chance to show him that having a wife is just what he needs.  But Greg is proving to be harder to impress than she thought and all the fancy meals, beautiful dresses, and seductive maneuvers haven’t worked at all.

Is there any way she can secure her place in his life or has she just lost her gamble?

Madeline Thompson, the woman the outlaws were looking for at the beginning of Boaz’s Wager (Book 2 in the Montana Collection), has finally arrived in Lewistown, Montana, but no one knew she was coming because she had disguised herself as a man. She was only going to stay in town long enough to get more supplies for her trip to Canada. But then fate intervened with a bullet to her shoulder…and now she’s not going anywhere.

When Marshal Shane Taft discovers Madeline’s true identity, he knows only a desperate woman would take such a big risk in traveling through the wild territory of Montana without a chaperone. That alone prompts him to protect her. Finding out she’s recently widowed and is carrying a child prompts him to propose marriage.

Madeline’s first husband left a lot to be desired. Besides thinking women had nothing worthwhile to contribute but an heir, he was cold toward her. She would say no to the deal Shane is offering, but necessity forces her to marry him. Nothing good can come from being under another man’s thumb.

That is, of course, unless he happens to be the right man.