Helena, Melissa, and Chloe have started arranging marriages, but not all will go smoothly on the way to a happily ever after…

Regan Alger, the Lady of Cantrell, is bored with her life. Yes, she’s been more fortunate than most. She was once married to a wonderful gentleman, and this love resulted in her young son—a boy she loves more than anything. But even a son can’t fill the void in her life. She misses having a husband, both in and out of bed, so when she happens to come across a gentleman at a ball who ignites her passion, she decides he’ll be her next husband. And she’s not the least bit shy about letting him know it.

Just as determined as Regan is to have Mr. Malcolm Jasper for a husband, he’s equally determined to end up with anyone but her. If he marries her, his life will be one of chaos and scandal. He’s sure of it. After all, she’s much too outspoken and flirtatious. So he jumps at the chance for an arranged marriage, thinking once he secures a reputable and quiet bride, Regan will leave him alone. Little does he know, though, his sister and her two friends know Regan wants to marry him, and they are more than happy to help Regan get what she wants.

Regan’s risk pays off. She manages to secure him as her husband. Will the gamble pay off? Or has she just doomed them both? 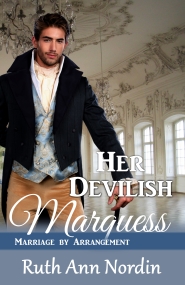 Dr. Derek Westward has been happy living his life doing everything possible to upset the Ton. Second to his occupation, it’s one of his favorite pastimes. Then his brother dies, and the worst thing imaginable happens. He inherits the title of a marquess. Now he has to secure the future of his family’s estate with an heir, and worse, he’s expected to be on his best behavior, something he’s been unable to do since childhood.

Miss Danette Everson has given up on ever marrying. At twenty-five, she’s resigned herself to spinsterhood, until her friend decides she’d be better off married. Before she knows it, she’s a bride. But her new husband isn’t the reputable gentleman she was hoping for. No, he’s got a horrible tendency to scandalize the Ton at every opportunity that presents itself. Surely, a pair couldn’t be more mismatched. Whatever were the three matchmaking ladies thinking when they arranged for her to marry the most devilish marquess in all of London?

Warren Beaufort, the Lord of Steinbeck, prides himself on having the best of the best. From his furnishings in his townhouse to his clothes, he chooses everything with the intention of impressing others. And more than that, he has amassed a fortune that is the envy of many in London.

One thing he lacks, however, is an heir. In order to get the heir, he’ll need a wife. The lady must either come from significant money or she must be extremely beautiful. It matters little to him who he gets as long as he benefits somehow from the match.

Lady Iris, the Duke of Hartwell’s daughter, has money, but she lacks both grace and looks. One thing she does have, however, is the good sense to know a gentleman like Warren is all wrong for her, which is why she’s horrified to learn she’s been matched with him for marriage. But the Duchess of Ashbourne and her friends assure her that she and Warren have so much in common they are an ideal match.

Having no way out of the marriage her father has arranged for her, she has no choice but to marry Warren. While she might have to give him the heir, she will never, under any circumstance, give him something far more precious…her heart.

6 Responses to Marriage by Arrangement