An Unlikely Place for Love

Kate Tanner is getting more than she bargained for in this “woman disguised as a man” romance.  Fleeing from her parents’ killers, she disguises herself as Billy Ingram and leaves the big city Virginia life to work on a remote farm out in the middle of nowhere, North Dakota where the handsome, but aloof, Chad Walker hires her as a farmhand.  Between trying to prove that she can handle the more demanding farm chores and trying to fit in with the other farmhands, she has her work cut out for her.

Then, one morning, Chad discovers she’s a woman, so she quickly makes up the excuse that “Billy’s” sister, Kate, decided to come by for a visit.  That’s when things really get interesting.  Lacy Montgomery is in love with “Billy” and nothing disgusts the woman.  The farmhands are in love with Kate.  She’s in love with Chad who may or may not love her back.  Her brother, the real Billy, shows up and she’s forced to don on another female disguise to ward off Lacy altogether.

Among the laughter and constant costume changes, Kate might discover that the most unlikely place for love is the perfect place after all.

When Carrie Allen learns that her father has arranged a marriage between her and Justin Monroe, she knows that a pair couldn’t be more mismatched.  And she wants out!

Justin Monroe has loved Carrie for years, so he jumps at the chance to marry her.  But he’s in for a surprise when she tells him the truth…and asks for an annulment.

Too bad for her he’s not willing to give up without a fight.  Too bad for him she’s not going to make that easy.

Will he succeed in melting her cold heart or will she forever be “the cold wife”? 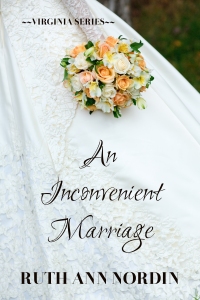 In order to receive his inheritance, Jake Mitchell must marry. In order to save her family’s farm, Sue Lewis must marry a rich man. So Jake comes up with a plan.  Why not strike up a platonic, business arrangement where they can marry each other for six months? Then they are free to annul the marriage and go their separate ways.

Unfortunately for him, the people he knows are determined to keep them together. Between an army of suitors willing to woo Sue before her annulment and the Lewis brothers scheming to show Jake how attractive she is, laughter and love are in the air. And in the end, a confirmed bachelor might discover that an inconvenient marriage may not be so inconvenient after all.

Adrienne Dayton flees from an arranged marriage.  While heading on a train bound for New York, her father finds her.  In an effort to escape him, she falls off the train, dragging Trevor Lewis with her.  They find themselves stranded in a small Virginia town where they will have to work to pay for their train ticket so they can continue on their way to New York.

However, the single men in town are interested in her and want her to stay.  Thinking that all men have ulterior motives, she rejects any notion of getting married.  Though she and Trevor don’t immediately get along, he is intrigued by her and wonders what it will take to win her heart. When she offers to show him what romance is by fixing him up with a local girl, he turns the tables on her. He’ll be the one to show her what romance is…and get her to marry him.