This series features Sep (Joel Larson’s brother-in-law in Shotgun Groom who was fourteen at the time), and it will have Richard Larson’s twin sons, Anthony (Tony) and Mark, in it. 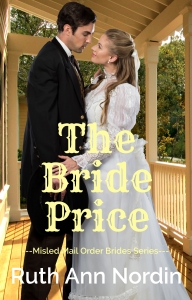 A mail order bride. A scarred settler. Will love stake its claim or send them packing?

Angela Frank is tired of teaching other people’s children. Her job is a constant reminder that she has no family of her own and no prospects for a hometown husband. When she spies a mail order bride advertisement, she dreams of a life where her deformities are overlooked by a strapping Omaha frontiersman. She decides to risk everything for her last chance at a family…

Sep Wilson carries scars from a troubled past. And while he’s not the marrying type, when he hears that an unscrupulous local is running a shady mail order bride scheme, he can’t help but intervene. But he never expected his good deed to end with him married to the mysterious Angela…

The two outcasts may have finally found someone who can help them heal their past. But in uncharted territory, the chance for love may not be enough to keep them safe…

The Bride Price is the first book in a series of high-spirited mail order bride western romances. If you like fiery chemistry with a tender touch, gritty frontier settings, and unconventional heroes, then you’ll love Ruth Ann Nordin’s tale of love.

Buy The Bride Price to journey to the heart’s unmapped territory today! 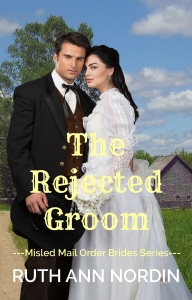 Anthony (Tony) Larson and his twin brother, Mark, have been asked to marry one of the two unfortunate women who are in need of a husband.  One woman is Velma Murdoch and the other is Natalie Harper.

Tony falls in love with Velma as soon as he meets her, and he’s excited when Mark tells him she’s chosen him to marry.  What he doesn’t realize until he takes Velma home is that she thought she was marrying Mark.  But Mark tricked both of them into marrying each other so he could be with Natalie.  While he’s upset with Mark for deceiving him, he’s even more upset to find out Velma had wanted to marry Mark instead of him.

Velma is just as upset with Mark as Tony is.  A marriage to Tony isn’t going to work out well at all.  He’s a farmer who lives in a sod house, and she doesn’t know the first thing about housework or caring for animals.  She was much more suited for Mark who owned a business.  Just how are two people who are a bad match going to find common ground?  She can’t cook anything right, she can’t milk a cow to save her life, and there’s no way she can mend clothes.  She was brought up to help her future husband entertain guests at dinner parties, not help out on a farm.

Can a man who feels rejected and a woman who doesn’t feel competent on a farm find something as wonderful as love? 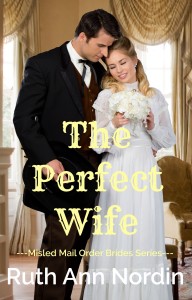 Natalie Harper has just married the man of her dreams. All of her life, she has wanted a husband who would be kind, gentle, and handsome. She wanted a companion she could share her life with. Mark Larson fulfills all of those dreams. And she couldn’t be happier.

However, Mark is also wealthy. The money doesn’t mean anything to Natalie. She’s just happy to be loved by him, but she soon discovers that his wealth comes with some unexpected problems. She grew up on a farm with very little to her name. No one cared about how people drank tea, how well they danced, or how much education they had. They didn’t judge people based on any of those things.

In Mark’s world, though, she’s expected to follow certain etiquette rules she didn’t even know existed. And the women in her new social circle aren’t the least bit shy about letting her know she doesn’t meet up to their standards.

Yes, she married Mark because she loved him, but she’s quickly learning there’s more to marriage than love. A lot more. And she’s not sure she has what it takes to make it work. 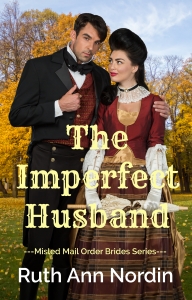 From the time they were children, Annabelle Larson hasn’t liked Ben Martin. Ben and her brother used to get into all kinds of trouble, and though her brother’s led the schemes, Ben’s never done anything to put a stop to them. And since she’s been subjected to some of their ridiculous schemes, Ben’s been nothing but an annoying nuisance. So when Ben forces her hand in marriage, she’s furious. How could he do something that has just changed her entire life without any thought to whether or not she even wanted it?

Though Annabelle refuses to believe it, Ben’s motives were good. If he hadn’t stepped in to marry her when he did, she would have ended up with a man known for unscrupulous behavior. The trouble is, she refuses to believe him, and worse, she won’t even give him a chance to prove he can be a good husband. So in a desperate move to figure out how he can make her fall in love with him, he disguises himself as a woman and joins her lady’s group.

The Imperfect Husband is a romantic comedy of one man’s attempt to woo the woman he’s been secretly in love with ever since they were children.