Here’s a quick overview of the Chance at Love Series:

Here are the links to buy The Mistaken Mail Order Bride: 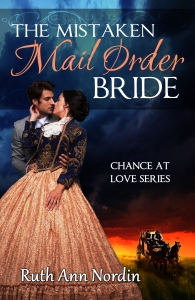 Eric Johnson has been writing to his mail-order bride for months, and at long last, the day she’s due to arrive has come. Only, the young lady who comes off the stagecoach isn’t at all what he expected. She’s homely in appearance, and she has an orphan child with her.

However, he is a man of his word, so he’s going to marry her. He had enjoyed their correspondence over the past year, after all, and really, initial impressions aren’t everything. But when the preacher pronounces them husband and wife, he finds out she’s the wrong lady.

Caroline Benton’s just as shocked as he is, not realizing she’d gotten off at the wrong town and followed the wrong man home. Why, oh why, didn’t she think to ask him his name? Now she and the orphan child she brought with her are stuck in a strange town with a man who’d been waiting for someone else.

She can’t imagine he’s at all happy to be paired up with her for the rest of his life. Not only is she rather unattractive, but she doesn’t know the first thing about housekeeping. Just what is she supposed to do to convince him it’s not the end of the world that he married the wrong mail-order bride?

I’d love to know your opinion about the email I just sent out to those of you on my email new release list.

If you’re on my email list, I am going to do something different this time.  Instead of putting in an extra scene (prologue, epilogue, or deleted scene), I decided to explain the orphan’s backstory and then discuss the gun laws back in the historical old west (in the United States) from the research I did.  Below, I am including a contact form you can fill out to let me know what you prefer.  The most popular response will be the thing I’ll go with.

Also, Janet Syas Nitsick and I have a private Facebook group.

It’s a casual group where we can talk about anything that’s on your mind. If you’d like to join, here’s the link.  Just ask to join and we’ll let you in. 😀

4 Responses to The Mistaken Mail Order Bride is Now Available