Return of the Aliens Trivia

I know this isn’t on the list of things I had up to do next. That was The Earl’s Wallflower Bride. But I have just gotten through rereading Return of the Aliens. In light of the virus that caused almost every country in the entire world to lockdown, various politicians in the world calling for a one world government (which isn’t all that new), and the Pentagon recently releasing footage of UFO (or “unidentified aerial phenomena”, as they’re calling it), it just seemed like a good time to go back and read the book. I hadn’t read it since I published it, so I’d forgotten quite a bit of it. 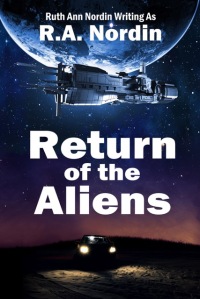 1. I got the initial idea for the book back in 2009 when I saw a You Tube video (from someone I can’t remember) who said that the US government was going to declassify UFO footage the military has taken over the years. My first thought was to laugh. But the writer in me asked, “What if it did happen? What if the government suddenly came out with alien disclosure?” And that one question led me down a rabbit trail that introduced me to conspiracy theories I’d never heard before.

2. It took over a year for me to write this book. The rabbit trail of one conspiracy theory after another evolved as I did more and more research. It led to things like the Illuminati, underground bases where strange experiments are going on, super soldiers, black-eyed kids, false flag events the government puts into place to scare people into giving up their rights, and the meaning of different colored dots in the mailboxes to signify who is a compliant citizen and who isn’t. Since these were conspiracy theories, it was hard to separate fact from fiction. But those theories made for good storytelling.

3. Now, I do believe the Bible and the prophecies that point to the rapture of the church, the Great Tribulation period, and the second coming of Jesus Christ to this Earth. I also believe there is a spiritual world going on around us composed of angels and demons. I have not had visions or dreams or anything like that. I just study the Bible and go by what it says. I do, however, have a friend who is attuned to the spiritual world. I know it exists. I just don’t have any personal stories to share about it. Anyway, Return of the Aliens was written from the “What if….” standpoint. What if the conspiracy theories are true? If they were true, how might they collide with Bible prophecy?

4. It was a lot of fun playing with all of these neat ideas, but it was also very draining. The book took over a year to write because I had to keep taking breaks. I was wiped out by the time it was done. The extensive research I did for this book was more than I want to do with any other book, and this is why I have no intention of writing anything else like it.

5. Autumn’s name comes from the lateness of the hour since autumn is the season where the leaves die and fall off the trees. It represents the end of one era (summer), and it also represents a transition into the next (winter that leads into spring). This story begins the end time events. In Bible prophecy, preachers often say that the hour is late and we’re very close to Jesus’ return. I realize they were saying that even in Peter and Paul’s day, but this virus has shown me how connected people are on a global scale. I’m seeing things I thought I’d never see, and it sets the stage for what happens in the Book of Revelation.

6. Devon was meant to be a bad guy who stayed the villain. I picked his name because it was close to “devil”. He was supposed to represent the evil forces in the world. That’s why Autumn saw the demon hovering around him. However, about 1/3 of the way into the book, I realized he was going to turn into a hero. No one was more surprised than I was by the turn of events.

7. Alex was supposed to end up with Autumn, but that changed on me, too. Alex had two choices to make, and he chose to hold onto his anger. Vanessa was very hard to write, too. I liked both of these characters, but they made their choices, and I had to follow the results of those choices to their conclusion. While Alex’s choices were based in resentment and bitterness, hers were made out of fear.

8. The alien stuff is pure speculation. I was listening to some people at the time who held the theory that our “saviors” would appear to us as aliens but they really were fallen angels. Having watched the movie Mission to Mars where the astronauts learned that aliens planted our DNA on Earth, I decided to go with that approach to explain the aliens’ appearance in the book.

9. I enjoyed writing the scenes with Devon the most because it allowed me to explore various techniques in working with psychological suspense and horror. In my opinion, psychological suspense and horror have the strongest emotional impact than the slasher kind of stuff. That all said, this is not a book for children. It’s for adults. I wanted to write something for a mature audience because the subjects I tackled were dark.

10. The scenes with Alex and the gray alien freak me out even to this day. While I wrote them, I was seriously spooked and would imagine all kinds of crazy things happening in the house. I was relieved to get past those scenes, and when I reread the book last week, I skimmed those parts. I think it’s because demons were tormenting him, and since I believe demons are real, that just hit too close to home. The conspiracy theory stuff Devon went through were more of a “maybe/maybe not” scenario, so it’s easier to brush that off.

11. I didn’t get to all the seal, bowl, or trumpet judgments mentioned in the Book of Revelation. I originally set out to do that, but there was so much already going on in the book that I couldn’t have possibly fit everything in. Instead, I focused on the four main characters (Autumn, Devon, Alex, and Vanessa) and dealt with their specific stories.

12. The original set up for this book was six installments, so it started out as a serial. I later dropped the individual small books and put everything into one book that is what you get today.

2 Responses to Return of the Aliens Trivia