Why I’ve Been “Hiding” From the Online World: Been Working on the Second Draft for An Inconvenient Wife

The good news is, I’m done with the first draft of An Inconvenient Wife, so it’ll be published next month! 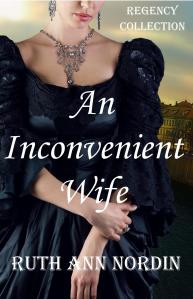 I am very much behind on emails and replying to Facebook comments/messages.

I’m not trying to ignore anyone.  I’m just trying to smooth out the first draft of An Inconvenient Wife, and I need to get this done as soon as possible because an author who is familiar with the Regency era has offered to look it over for accuracy.  The thing is, she’s very busy, so I want to get it to her before she heads out to a conference that’s quickly coming up.

It’s really a sweet gesture on her part to do this for me.  Since this is my first Regency,  I feel like I’m out of my element.  So ever since Saturday, I’ve been working on this book pretty much from the time I get up to when I go to sleep, and all I can say is that it does take me a good half hour to track down details such as “Where does the butler stand while the master of the house is eating his meal?” and “What in the world did they call condoms back then?” I spent a half hour tonight tracking down what they called the head employee at the stable.

I’ve also spent a significant amount of time cleaning up the inconsistencies in this book.  And there were two subplots in particular that I kept changing as I was writing them.  For example, the heroine’s sister originally married the jerk halfway into the book and then she didn’t 3/4 of the way into it, and she married someone else by the end.  Then there was the irresponsible (but lovable) 17-year-old who was the ward of the hero’s friend.   This ward helped Claire dress up as a stable boy, but then the hero decided to pop up and find her (something I didn’t originally anticipate).  So it threw me off for the rest of the subplot, so I ended up changing the ward’s ending for the book.

Due to these changes, I also had to modify some conversations the characters had, and believe it or not, that proved to be the hardest part because I didn’t want to repeat conversations or have characters saying one thing in one part of the book and saying something totally different in another.

I figure the next Regency will be easier, and the one after that will be even easier.  There’s always a learning curve to go through when writing in a different time period.  With historical westerns, I feel very comfortable in that world, especially with the Larsons.  I know where every building and house is located, how everything looks, what people use and how they look.  It’s as natural as being in my house, but I’ve been with that world since 2008.  In the contemporaries I’ve done, I live just south of Omaha so I know the layout already, and I’ve lived along the Florida panhandle where Suddenly a Bride and Runaway Bride takes place.  And since it’s contemporary, the world is already familiar.

But Regency is a whole other matter.  I have to place myself in a different setting, and though I’ve read a book on the time period, watched a couple of movies, and researched on the internet, it’s still been challenging as I wrote the book.  Writing is an active process where I’m forming the world.  Over time, I expect the Regency world will be as natural to me as the historical western one is, but it will only become that way if I keep writing, and the more I write, the better I’ll get at it.  One of my favorite sayings is “Nothing ventured, nothing gained.”  So while I might not get everything perfect, at least I know I’ve done my best and will keep improving.  😀

4 Responses to Why I’ve Been “Hiding” From the Online World: Been Working on the Second Draft for An Inconvenient Wife