Thanks to Stephannie Beman for acting the part of Kyala in this interview!

Owen Russell: Where were you on March 9?

Kyala:  Um…Probably at home. Though I might have been at the river with the other nymphs…Or possibly at Persephone’s…There is also the possibility that I was at Olympus. It’s such a social place and there are so many characters mad at Stephannie right now so they are so willing to join Dave’s Union.  Why?

Owen: Because you’re suspected of kidnapping Dave Larson.  Didn’t you get my letter that said I had to interview you?

Kyala: I got as far as you wanting to meet me and I sorta skimmed the rest. It really wasn’t that interesting a letter. Why would a kid napping have anything to do with Dave?

Owen: Not “kid napping”.  I said “kidnapping”.  As in, you took Dave off to some remote tree in the middle of nowhere and where you can use him as your sex slave.  You didn’t want to join his Union.  You wanted to run off with him.

Kyala:  You mean, you think I abducted him and brought him to my tree in the middle of nowhere so I could use him as my sex slave? Sounds fun. But I would have to say you have a far baser thinking when it comes to sex games then Dave would have. Do you have a wife by chance?  *giggles and bats her eyelashes seductively*

Owen: I…Uh… That is to say… *clears throat*  Don’t you bat your eyelashes at me, honey.  Dave has been missing now for a month and a half.  No one has seen him.  He has a wife and children who depend on him.  This is no laughing matter.  Why are you chuckling?  I can’t stress how serious this is.

Kyala: Serious to you, love.  *winks* I can’t do anything about Mary and Ruth losing Dave. It’s not my responsibility to look after him. That’s what he has Mary for. If you ask me he’s probably off in some drinking hall drowning out his woes for marrying a closet hardian and having seven children. I mean what is wrong with you humans that you have to procreate like bunnies on a mission? Have one kid, raise it, and move on to the next kid.

Owen: When you’re mortal, you don’t have the luxury of waiting until one kid is grown up before having another.  Dave wouldn’t drink away his sorrows because he has none.   He’s very happy with Mary.  She’s been the light of his life.  But he is upset with Ruth for wanting to make him impotent in his next book, but since he only had three children at the beginning of that book and ended up with seven by the time Isaac’s Decision ended, then he obviously overcame that problem.  So really, having more kids proved he was virile after all.

Kyala: Too bad for you mortals. It’s so much easier on everyone when there’s not a gaggle of children underfoot. But what does Dave having children have to do with his disappearance? Really, Owen, stay on track. *lets her dress strap fall off her shoulder, gives him a suggestive smile, and pulls the strap back up*

Owen: *averts eyes* I was just expanding–I mean explaining–that Dave did have some annoyances, but none of them had to do with Mary.  I am wondering why this Union is so important to you?  You have nothing to gain from joining it.  Ruth isn’t your author.

Kyala: Whatever you think. I still say the poor man is miserable. But that’s not why you asked me here. Stephannie’s telling me to just answer your “damn” questions, whatever “damn” means. *sighs, sits down, and crosses her legs* So here is your answers. I wanted to join Dave’s Characters for the Better Treatment Union because I think Characters should have equal rights. It’s not fair that authors get to play with our lives like gods and make us miserable just so they can sell the story. I want to be able to dictate my story, not sit there like a puppet having my strings pulled at her whim. Dave had good points which I totally agree with and it didn’t hurt that he was good looking too.

Owen: So maybe you kidnapped Dave to find out where he’s hiding his plans to form the Union?  Maybe you’re going to form your own against Stephannie?

Kyala: I’m a nymph, Owen. I party. I have lots of sex. I join groups. I don’t plan anything past a few hours. It’s way to far in the future. Besides, it is so much easier to join his group than make my own.

Owen: So you admit you’re forgetful?

Kyala: I wouldn’t say forgetful. Memory selective would be a better term. *giggles and leans forward, showing her cleavage*

Owen: Is, uh, *blushes and clears throat*, is it possible you chose to forget you kidnapped Dave?

Kyala: You mean abduct Dave, right? Not make him a kid and let him nap. *shakes head and flips her hair over her shoulder* No, it isn’t possible that I would selectively forget that I kidnapped anyone. I would like to visit them until we tired of one another. Is it possible that I would steal Dave away from his family? Give me some credit. He has kids, Owen! How disturbing would that be for me to seduce Dave in front of them! I would wait until he was away from his family before I seduced him.

Owen:   So you abducted Dave to get him away from his family?  He was last seen going to the barn.  Maybe you were waiting for him there.

Kyala: *sighs in exasperation* I like you, Owen. I really do. But really? I prefer my men ready *scans him up and down and winks* and willing. If you did your job you’d know Dave wasn’t interested. What proof do you have that I abducted Dave anyway?

Owen: *closes his laptop and stands up* The whole point of these interviews is to collect proof.  I think we’re done, but don’t leave town…or rather, your tree. *hurries out of the room*

Kyala: What an odd human. 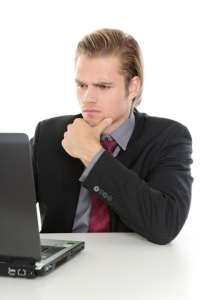