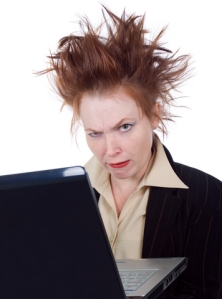 Ruth Ann Nordin as you've never seen her before.

In a bizarre turn of events, Ruth Ann Nordin has used futuristic technology no one understands to go into her laptop’s hard drive to go to the Nebraska stories.  Upon last reported, she was hiding in the back of Neil Craftsman’s wagon as he headed home from the mercantile.

“I didn’t even know she was there,” Neil said.  “It’s a shame, too.  I would have gotten her autograph if I’d known.  Anyone who can get under Dave’s skin enough to drive him crazy is my hero.”

Fortunately, I was able to track down an eyewitness who saw her hitch a ride to the country.  “At first, I didn’t know it was her.  She looks nothing like her Facebook picture.  But all that aside, she was definitely upset.  I couldn’t make out everything she said as she got under the blankets in the wagon, but I definitely heard her say she was going to get to the bottom of this whole Dave Larson thing,” Sally Larson said.

Owen Russell and I took a trip out to Dave’s farm to investigate further.  Upon our arrival, Ruth was going through the whole house where cushions were tossed aside and dresser drawers were pulled open.

An overwhelmed Mary and her three children were in the parlor in apparent shock.  “I don’t know why she’s here,” Mary said.  “She’s never come into her stories.  She’s usually dragging us to her time to talk to her.”

We didn’t find Ruth in the house.   We, did, however find her in the barn, digging up hay from the loft.  When I asked her what she was looking for, she said, “I’m looking for those plans he made.  I read the interview Owen did with Mary.  I refuse to let Dave’s rebellion continue.  He will not send that email to everyone and demand I change Forever Yours to suit his agenda.  I’m tired of all his whining and complaining.  He is not the author.  I am!  I have every right to write the book as I see fit. “

After sending in for reinforcements to get her down from the loft, Ruth finally gave up going through the barn in her search for papers no one is sure even exists.

“She might feel guilty for kidnapping Dave,” Tom Larson said.

“I hope she did do it,” Joel Larson said.  “If so, then maybe she’ll put him in his place and he’ll stop being so bossy.  I’m tired of going to his ’emergency’ meetings.  Just because he’s not getting everything he wants, it’s not an emergency.  The rest of us have more important things to worry about.” 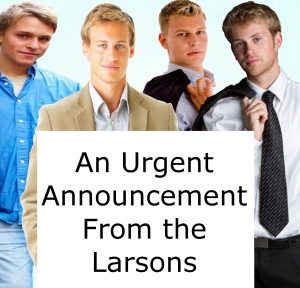 The infamous picture where Richard finally made his appearance. From left to right: Richard, Dave, Tom, and Joel.

“I wasn’t even called into the last emergency where Dave was calling for another boycott on Ruth’s books,” Richard Larson said.  “I had to show up unexpected, and had it not been for Tom asking about me, no one would have even known I was there.  It sounds like all the other Larson brothers have been included in everything, and that’s not fair.”

“Sorry, Richard,” Joel said.  “We assumed you and Amanda wanted to move back to New York, so we didn’t think you were interested in what happened in Nebraska.”

“Of course, I’m interested in what happens here, and no, Amanda and I aren’t moving to New York.  We’ll never move to New York after what she went through,” Richard replied.

Not able to find the things she was looking for, Ruth ended up leaving but not before she vowed, “I’m so tired of Dave Larson’s irrational demands.  I don’t care how much he protests.  He won’t get his way.  And he’s not really missing.  He’s hiding somewhere to get some attention.  This is all a ploy!  Why can’t anyone else see it?  He kidnapped himself!”

“It’s so sad when people break down like this,” Owen said after strapping Ruth to a wagon to take her back to town so she could go back to whatever portal she went through to get to 1885 Omaha.

We can only hope that Ruth gets the help she needs because without her, more of our books won’t be written. 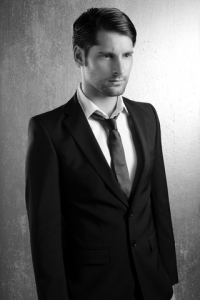 Joseph Connealy has been reporting for 27 years.  He started his career in Dayton, Ohio at the  Dayton Weekly Gazette.  When it shut down in 1860, he worked two years as a farmhand until he found employment at the Dayton Daily Journal which opened its door in 1862.  In 1869, he moved to Omaha, Nebraska where he found employment at the Daily Herald where he’s been working ever since.