Dave Larson, Christopher Robinson, and Gavin Blackheart Share Their “Feelings” On the Hero Swap (and a Poll on Who the Best Hero Is)

Christopher: That’s not funny, Ruth.  We are not here to discuss our “feelings” like a bunch of women.  We’re here to say what a ridiculous idea you had with a hero swap.

Christopher: I should have put you in The Earl’s Inconvenient Wife where you would be cleaning chamber pots.

Dave: We don’t have flushing toilets where I come from, and we don’t always go to the outhouse, especially when it’s cold out or when it’s night.  Chamber pots go under our beds for easy use so emptying those isn’t something that scares me.

Christopher: All I can say is that the American old west was a disgusting and dirty place.

Gavin Blackheart: Oh come on, Christopher.  It wasn’t that bad.

Christopher: Who are you and what did you do with King “I’m a Warrior Haha” Blackheart?

Christopher: So am I, but I don’t look like a dork.

Christopher: As long as you think it, that’s all that matters.  By the way,  I can’t believe you showed up to the barn wearing a knight’s outfit.

Gavin: I wasn’t sure what the scene would be before I got there.  I hoped I’d be confronting Neil Craftsman, but as it turns out, it was a boring mare giving birth scene.

Christopher: Yeah, like reading a letter was so much more interesting.  *rolls eyes* That was lame.

Gavin: And you were ready to let Sandy read it.  That was rather thoughtless of you.

Christopher: She didn’t really want to know what was in the letter.  She just wanted to see you.

Dave: You can’t prove that.

Christopher: When I gave her the chance to read it, she decided not to.  If that doesn’t prove why she was really there–without any guards following her–then I don’t know what it proves.

Gavin: You can’t deny it, Larson.  Your wife was all on my case for me to take off my shirt.  She hears about my rippling muscles and wanted to see if the rumors were true.

Christopher: It’s so sad when the hero loves himself more than the heroine.

Dave: Mary had no interest in you or your body.  Neither did Sandy.  Sandy’s main goal was to make you miserable.  I’d say “your welcome” for following your instructions and not giving her the letter when I had the chance, but given the fact that you think so highly of yourself, I should have shoved you out the window instead of that letter.

Christopher: Way to go, Dave.  Who thought you had that vindictive streak in you?

Gavin: Yeah, you keep talking like that and you’ll lose your “good boy” status pretty quick.

Christopher: You know, Dave, it really is a shame, you didn’t pursue some kind of revenge on Neil in Eye of the Beholder.  I went ahead and read To Have and To Hold and Isaac’s Decision–

Christopher: I had to see if Neil ever got what was coming to him.

Christopher: Neil never got what was coming to him.

Dave: That’s because I don’t believe in solving problems with violence.

Gavin: You didn’t even punch him.

Christopher: Yeah, I was pretty disappointed.  No wonder some people want to throw their ereaders against the wall when they finish Eye of the Beholder.

Dave: You’re on to talk, Christopher.  You had Lord Pennella threaten you and your wife had to step in and save your hide before you got yourself killed in a duel.  As for you, Gavin…  Well, I don’t think it’s appropriate for you to have made sexually suggestive comments to another man’s wife.

Gavin: The hero swap was all in good fun.  None of it was to be taken seriously.  The women knew that.

Dave: Even so, some decency wouldn’t be a bad idea.

Christopher: *laughs* Oh Dave, you guys in the historical US west are so funny with what you consider proper and improper.

Dave: You guys in the Regency time period have the stupidest rules set in place so you won’t offend “The Ton”.  I mean, you have to refer to people by their titles and you have to say “lady” instead of “woman”.  God forbid someone should dance more than twice with the same partner at a ball.

Gavin: I have to admit, some of the Regency things that can create a scandal are ridiculous.  I couldn’t handle those kinds of limitations.

Christopher: Well, it beats having to get up at the break of dawn in order to start in on that farm work and having to practice every day for a battle that may or may not come. 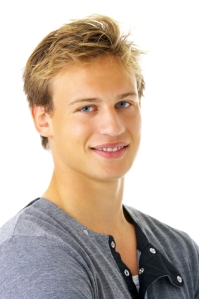 Dave: Farming is hard work, but it’s good work.  It’s because of farmers that people eat, you know.

Gavin: Let’s just admit that we’re all better off in the stories we were put in.  Had Ruth put us in any other book–

Christopher: or with any other lady–

Dave: I could probably be happy anywhere as long as I had Mary with me, but I’ll admit I’m happiest where I’m at in Nebraska.

Christopher: No one offers better comebacks than Agatha.  I like guessing what clever retort she’ll come up with to what I say.

Gavin: And at least Sandy has a sense of humor when I do make my sexual suggestions.

Ruth Ann Nordin: I’m so proud of you guys.  You all agree on something.

Christopher: It has nothing to do with sentimental feelings, but yes, we decided the cousin of an earl deserves better in life than to deliver foals or practice with a sword in a courtyard all day.

Gavin: I didn’t practice all day.

Christopher: Just about every scene had you in the courtyard.  It was boring after a while.

Gavin: You read my book too?

Christopher: Yes, I did.  And thank God there won’t be a sequel.  Your ego is even bigger than Dave’s.

Christopher: Not in the books but when you’re on this blog…

Gavin: He has a point, Dave.  No one gives Ruth more grief than you.

Dave: All done in fun.

Ruth: Yes, I just love it when my characters stage a boycott and try to rewrite my books.

Dave: If you didn’t, you wouldn’t allow the posts to go up.  Now, are we going to have this vote or what?

Gavin: Demanding and a big ego.

Christopher: Quite a combination.

Ruth: Alright.  Let’s break it up.  You two were having a good moment up there when you were all in agreement.  Let’s not get into another argument.  I’ll post the poll now.

Okay everyone, this is your chance to tell the guys who you love best!  🙂

Ruth Ann Nordin mainly writes historical western romances and Regencies. From time to time, she branches out to contemporaries romances and other genres (such as science fiction thrillers). For more information, please go to www.ruthannnordin.com or check out https://ruthannnordinauthorblog.wordpress.com.
View all posts by Ruth Ann Nordin →
This entry was posted in character interview, Eye of the Beholder, His Abducted Bride, His Reluctant Lady and tagged Christopher Robinson, dave larson, Gavin Blackheart. Bookmark the permalink.

2 Responses to Dave Larson, Christopher Robinson, and Gavin Blackheart Share Their “Feelings” On the Hero Swap (and a Poll on Who the Best Hero Is)