I was supposed to make this post on Sunday, but my kids were constantly demanding my attention and we kept losing Internet. Then on Monday and Tuesday, I was playing catch up on finalizing The Rejected Groom for my editing team and doing the book keeping for November.

So today (at long last), I’m finally getting this post up. 🙂

First of all, Married In Haste got a mention on the RT Book Reviews blog.

It was an unexpected honor, and it’s only because of you guys that this even happened. So my heartfelt thanks to you.

Speaking of Married In Haste, I have updated the release date to December 30. Originally, it was due for a March release.

Married In Haste is also Brad’s story. I introduced Brad in The Rake’s Vow. Brad was Loretta’s older brother. In this book, he finally gets his happy ending…with some hiccups along the way. But if there weren’t some problems, there wouldn’t be a story. 😉

During the course of writing Married In Haste, I came up with an idea for Stephen’s story. Stephen is the younger brother of Brad and Loretta. That story is The Marriage Contract, and I’m currently 12,000 words into it.

The book that follows Married In Haste in the Marriage by Fate Series is Make Believe Bride. 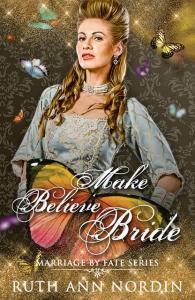 This is Lord Whitney’s story. I know what most of you are thinking. Who on earth is Lord Whitney? I briefly made mention of him in The Reclusive Earl. He was the one Lady Steinbeck and Opal thought was very boring. I bring him in again in Married In Haste, but he only has a small scene there. For those of you on my email list, he was in a special epilogue I wrote for If It Takes A Scandal. Other than that, I haven’t really brought him up.

The heroine in this one is Lady Stacey, who is part of Lady Eloise’s group. I haven’t brought her in heavily into a story yet, though she’s primarily in the background whenever Ladies of Grace meet.

Today, while I was writing in this story, I got an idea for Book 4 in this series. Originally, I was going to bring in Miss Tumilson from The Reclusive Earl, but a conversation developed during the scene that gave me an idea for Miss Webb’s story. Miss Webb is a part of Lady Eloise’s group, and she’s had more speaking parts than Lady Stacey. Anyway, since Lady Eloise’s reputation is falling apart due to events in Married In Haste, the other members are trying to figure out how to save the group (and their own reputations).

Miss Webb has come up with a plan that I think will make for an interesting story.  I’ll have to think on the plot, but I see a lot of potential for the story. I think I have an idea for a Book 5 and 6 in this series, too. At some point, I do want to do a story for Miss Tumilson, but at this point, I don’t even know if she’ll fit in the Marriage by Fate Series. I might have to put her somewhere. We’ll see what develops as events unfold in the series.

November turned out to be a very exciting month. I actually finished The Rejected Groom.

I didn’t think I was going to finish it until the end of this month. So I’m very happy about that.  I am enjoying all the stuff going on in the Regency world, but I loved writing The Rejected Groom. I loved it so much, I ended up going back and rereading Wagon Trail Bride.

For those of you who don’t know, Wagon Trail Bride is Richard and Amanda Larson’s story. At the end, Amanda gives birth to the twin boys: Anthony (aka Tony) and Mark. Since Tony and Mark happen to be close to Sep’s age, I decided they would be in Books 2 and 3 of the Misled Mail Order Brides Series.

The Rejected Groom (Book 2) is Tony’s story. The Perfect Wife (Book 3) will be Mark’s story. Now, Tony and Mark have a younger sister named Annabelle, and I already know she’ll be in Book 4. I just haven’t come up with a title or plot for it yet.

Anyway… while I was going through Wagon Trail Bride, I found myself drawn to the crazy antics of the Larson siblings. The same was true when I read The Marriage Agreement. I forgot how much fun I had writing about the crazy antics of that bunch, especially Tom and Joel. Then I thought, “I should go back to the Larons with another series after I’m done with this one.” I want to do a series with Tom’s four daughters. (Tom never did have sons. He’ll have grandsons, though, so it’ll work out.)

Now, I don’t know when I can get to Tom’s daughters. My writing schedule is pretty backed up right now. Some people have requested a third story for Dave and Mary Larson (and some have asked me not to write another book for them), so I’ve been putting that one on hold. I don’t know if there’s that much of an interest to write it.

Since I can’t get more than nine or ten books out in a year, I can’t afford to take on a story that won’t appeal to the most people possible. Being a writer isn’t easy. You have to decide which stories you can write and what you can’t write. Most of the time, the decision boils down to which ones have the greatest chance of pleasing the most people.

I judge this based on sales of past books. That doesn’t mean the books have to be wildly selling at the very moment, but it does mean when the books first came out, they had to have sold well. Books don’t stay up in the charts forever. Sure, books with a huge following like Fifty Shades of Grey and Harry Potter will maintain momentum a lot longer than most books, but nothing stays up in the charts forever.

The business of book selling is based on getting new books out on a consistent and regular basis. Authors watch what type of books consistently do better, and they base future writing projects based off of that input. If a writer wants to have the best chance of having a successful career, that’s what they do. They don’t keep writing the types of books people aren’t interested in buying.

This is why I dropped contemporary romances. Contemporary romances are a big selling genre, but they aren’t a big seller for me personally. I do much better with historical westerns and Regencies. That’s why I focus on those genres. Then I break down the types of books within those genres that have done well for me, and I narrow down what to write from there. My Native American Romance Series, for example, is one of my lowest all-time selling series. The interest isn’t there. That’s why I’m not doing another one. Over the longterm, the Larson family has done pretty well, so I keep going back to them. As for Regencies… I find that overall, my Regencies outsell any historical western romance 2:1 longterm. That’s why I am now doubling up on Regencies and trimming back on historical westerns. Also, standalones suck in sales. It’s why I always work on series these days. If I can’t figure out how to get a story idea into a series, I don’t use it.

This is all based on objective business decisions. Yes, I love every single book I write. I have a ton of stories ideas I would love to write. But since I can realistically only write about nine books a year, I have to be careful when I select which ideas get picked up. It’s just the nature of the business.

Wow. I didn’t mean to go off on a tangent like that. Sorry to ramble everyone. 🙂

Ruth Ann Nordin mainly writes historical western romances and Regencies. From time to time, she branches out to contemporaries romances and other genres (such as science fiction thrillers). For more information, please go to www.ruthannnordin.com or check out https://ruthannnordinauthorblog.wordpress.com.
View all posts by Ruth Ann Nordin →
This entry was posted in Uncategorized and tagged make believe bride, Married In Haste, the rejected groom. Bookmark the permalink.

4 Responses to Updates on What I’m Doing