More Updates on What I’m Doing

I am almost done with the epilogue that goes with Married In Haste (Marriage by Fate: Book 2).

(This book is coming out December 30!) 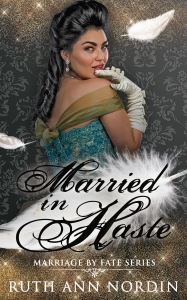 The only people who get this epilogue are those on my email list and those who are in my private Facebook group. (If any of those links don’t work, let me know.)

I have MailChimp handle the details on the email sign up because they want to make sure I’m not putting someone on my list who doesn’t want to be there. I used to put people manually in when people signed up, but I think handing the reins to them to do this is a lot better. I only send out an email through MailChimp when I have a new release out. I don’t want to clog up people’s inboxes. I average nine to ten new releases a years, so that gives you an idea of how many emails you can expect from me.

As for the Facebook group, this is the best way to give me feedback. I do ask for feedback once in a while. For example, I got ideas on the Married In Haste epilogue from the people in the group. I find it to be a very relaxing and casual way to communicate with others, and I think the atmosphere is very pleasant because the people over there are wonderful. Anyway, this group is something you ask to join and Janet or I will approve it. We do try to be careful about who we let in because of the amount of phony accounts that pop on on Facebook, so if we haven’t approved you, please send me (https://www.facebook.com/ruthannnordin) a message and let me know you have read my books or Janet’s books. That way we know you’re safe to let into the group. I recently had someone duplicate my profile on Facebook, and a few awesome people ran to protect me. It really meant a lot that they were looking out for me. The least I can do is protect you guys, too.

I haven’t set a new date yet, but it’s definitely coming out before June 2. I like to wait until the book is all done and ready to upload to do that. At the moment, it’s only on pre-order at Barnes & Noble, Kobo, and iBooks. For those of you who love the Larson family, this one is Anthony (aka Tony) Larson’s romance. Tony is one of Richard and Amanda’s twin sons.  I’m currently working on the other twin’s story (The Perfect Wife).

Make Believe Bride (Marriage by Fate: Book 3) looks like it’ll be out around April.

I thought The Marriage Contract (Marriage by Fairytale: Book 1) was going to be out sooner, but Make Believe Bride suddenly gained momentum, and I’m now further ahead in that story.

The hero of this story is Lord Whitney, and for those of you on my email list and in my private Facebook group, you might remember he was in the special epilogue that went with If It Takes A Scandal. He was the one who returned Corin’s pocket watch that Corin lost to Stephen so he wouldn’t get caught in the scandal with Celia. Candace ended up searching for the pocket watch, and finally found it becauase of Lord Whitney. Hopefully, that rings a bell.

Anyway, he also made a very brief appearance in The Reclusive Earl (Marriage by Fate: Book 1). He was the gentelman who bored Opal to death when he was dancing with her at the ball. I liked him, so I wanted to give him a story, and this one fits perfectly.

I didn’t see this coming when I started this book, but it’s the direction the characters are taking, and I’ve learned to wade through the unknown by trusting my gut while writing. Since this is a romance, the cover still fits the story. There is going to be a happy ending. Things are going to greatly improve for the hero and heroine. I think both characters are going to help each other grow in ways that I haven’t seen for a while in my stories. Usually, there’s one character that pretty much stays constant, but in this case, both characters will change dramatically during the course of the story. It’s surprises like this that make writing by the seat of my pants so much fun.

Since this post has gotten pretty long and one of my kids keeps coming up to me, I’m going to end things here. 🙂

Ruth Ann Nordin mainly writes historical western romances and Regencies. From time to time, she branches out to contemporaries romances and other genres (such as science fiction thrillers). For more information, please go to www.ruthannnordin.com or check out https://ruthannnordinauthorblog.wordpress.com.
View all posts by Ruth Ann Nordin →
This entry was posted in make believe bride, Married In Haste, the marriage contract, the perfect wife, the rejected groom. Bookmark the permalink.
Loading Comments...
Comment
×
%d bloggers like this: