First off, the past couple of weeks of writing have been the most fun I’ve had in a long time, so getting back to the strong heroines has been a great decision. That doesn’t mean that all of my heroines are going to be the strong type. Sometimes the plot will call for the hero to be the stronger of the two, but it’s nice to have that flexibility back.

Alright, so I’m still in the process of getting boxed sets together for my older stuff. Before the Native American Romance Series is ready to be in a boxed set, I need to reformat all of those books. That will take about a month. Each time I format, it takes about half a day to do one book. This is a four-book set, and I prefer to work on formats over the weekend as time permits. I like to write during the week while the kids are in school.

Since I wanted another boxed set that would be ready before school let out for the summer, I went through my books and picked a collection of books that would require the least amount of work to put into a boxed set.

I have put the original six Larsons together into a boxed set. It’s due out May 31.

I created a pre-order for this only because pre-orders give me plenty of time to organize everything together. I don’t have an assistant who helps me out with this stuff, and I find it easier to do things in small pieces. So one day, I’ll get the Booklaunch page up, another day, I’ll get the links together, and another day, I’ll update my website, and so on. That way, by the time the book is out, I’ll have everything together.

As a side note, I also handle my own emails, Facebook messages, etc. That’s why it sometimes takes me a while to get to you guys. I am interested in engaging with you, but I hope you know that it might take me a while to respond to the correspondence I get.

Okay, onto the new stuff!

The Perfect Duke will probably be published next.

Books in the Marriage by Fate Series are…

I thought it was going to be The Perfect Wife, but I got stalled in that book, and this one just took off. (This is why I write more than one book at a time.)

The heroine in this story is strong. I’m just over the halfway point, and I have the feeling that it’s going to be up to her to save the hero in some way. I don’t expect there to be a dramatic life-threatening situation, but I have a suspicion her brother is going to pin him in a situation where he can’t win. It’s too early to tell for sure, though. I have no idea how things will really play out. I’m just guessing at this point. As I get closer to the end, I’ll find out for sure.

One thing that surprised me while writing this is how devoted the hero is to the heroine. I knew the two would get along well from the beginning and that he’d fall in love with her first, but I had no idea just how devoted he is to her. It’s nice to work with a hero like that.

The Perfect Wife is still anticipated out for July.

Books in the Misled Mail Order Brides Series are…

Now, Natalie is a softer heroine. She has to be for the plot to work. I do think, however, she’ll be pushed to the point where she’ll have to take some kind of stand for herself against a certain adversary who popped up this week while I was writing in this story. I’m at the halfway point right now. I’m looking forward to bringing Velma in. I’ve already brought Annabelle in, and I’m currently setting the stage for her story in Book 4.

Today while writing, Mark made a reference to Joel and Tom, and that brought back a lot of the fun times I had writing Her Heart’s Desire, A Bride for Tom, Shotgun Groom, Wagon Trail Bride, and The Marriage Agreement. Those were the books where Tom and Joel were having their fun arguments. It’s little stuff like that which makes it fun to write books that take place in the same world, even if they are in different series.

One Enchanted Evening is still in the beginning stages.

Books in the Marriage by Fairytale Series are…

I’m not sure when this one will be ready, but I finally got around the masquerade ball today while writing it. This is loosely based off of Cinderella. When I say “loosely”, I mean “loosely”. In Cinderella, that character was a pure and sweet character. Marcy (the heroine in this book) has a tainted past. She did something terrible, and as penance, she’s hiding out at Stephen Bachman’s manor as a maid.

I finally figured out a way to get her to the masquerade ball to spend some time with the hero (Stephen’s friend Lewis who needs a wife). It was hard to convince her to do it because she doesn’t feel worthy of a happy ending. But I did it. Now it’s up to Lewis to convince her to marry him, which will be interesting to see how he manages it since he’s surprisingly shy and uneasy with himself.

This probably drives plotters nuts, but I honestly don’t know what is going to happen until I’m writing the scene. At any time, the story could veer in another direction during the course of writing the book. This is why I’ve had to go back and revise my descriptions on occasion. But I do expect this book to have a step-sister angle, and this is going to be something the heroine is going to have to face head on toward the end.

The Outlaw’s Bride is slowly coming along.

This is the first book in the Wyoming Series. 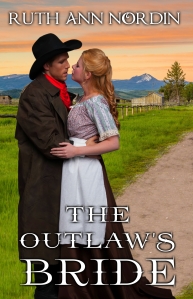 I’ve been aiming for 250 words each day I write. I typically write five days a week. I’m not in the “you must write every day” camp. I’m in the “you need a day or two off” camp. This is estimated for a November or December release, so I have plenty of time. I’d say I’m nearing the 1/3 mark at this point. The heroine here is very soft, but the hero is, too, so the two make a really good match. In this book, the heroine is pretty, but she grew up surrounded by people who told her she wasn’t. So she doesn’t believe she’s pretty. The hero, of course, will change all of that.

Ruth Ann Nordin mainly writes historical western romances and Regencies. From time to time, she branches out to contemporaries romances and other genres (such as science fiction thrillers). For more information, please go to www.ruthannnordin.com or check out https://ruthannnordinauthorblog.wordpress.com.
View all posts by Ruth Ann Nordin →
This entry was posted in Uncategorized and tagged One Enchanted Evening, The Larson Boxed Set, The Outlaw's Bride, The Perfect Duke, the perfect wife. Bookmark the permalink.