I thought it might be fun to bring in Eliza, the heroine in Loving Eliza.  I’m sure most of you’ve read her story, and you’ll recall in that story that Eliza gave birth to a baby when she was fourteen.  She never found out what happened to him once he was adopted, but she did get his baby picture and held onto it.  In fact, moving forward to the time Bride of Second Chances takes place, that baby picture is on her fireplace mantle.

When I wrote Loving Eliza, I had plans on writing a romance where she finally gets to meet her son and find out what happened to him.  So with that as an intro, I’d like to welcome Eliza. 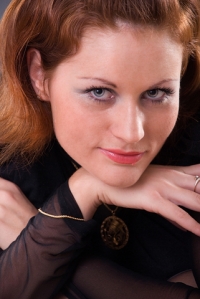 I’m glad you could come by to chat.

*smiles* If there’s one thing I’m good at, it’s chatting.

Yep.  And that’s exactly the kind of woman John needed, which was why I intended for you to be with him all along.  You fought that match pretty hard, remember?

Given my past, I wasn’t exactly the marrying type.

Everyone deserves a second chance.  Speaking of which, I have a surprise for you in this new book I’m writing.

I’m going to let you meet the son you had to give up for adoption.

For someone who’s known for talking, you’re oddly quiet.

Which is why it’s a surprise.

*shrugs* I don’t know if I’m the kind of woman who suits for being a mother, given my past and all.

Are you still dwelling on that?  Even after I gave you a happy ending in Loving Eliza and gave you a son to adopt?

I don’t think the son I gave birth to will be happy to learn the circumstances surrounding his birth.  That’s why you’re bringing us together, isn’t it?  Just like you brought up that man who was one of my customers back in Omaha when I got my picture taken with John.  So the whole town found out about it, thanks to that awful Harriet Lube.

But this will be good, Eliza.

I don’t know.  My stomach’s already tied up in knots.

He already knows he was adopted.   When the winter passes, he’ll come looking for you.

That might give me enough time to move and not tell you where I’ll be.

You know, Eliza, I’m surprised.  I thought this would be good news.  You’ve been hanging onto his baby picture for years.  Wouldn’t it be nice to see how he turned out?

Can’t you just tell me here in this meeting instead of bringing him up to South Dakota?

I promise you, it’ll end up fine.

Then I should do everything I can to write faster so I can put your mind at ease as soon as possible.

Enough with the sarcasm.  Mind showing us the picture you have of him?

No.  Here it is.  The woman holding him is the nice lady who adopted him. 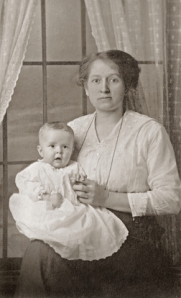 It’s too bad her husband isn’t in the picture with her.  The Grahams were such lovely people.  Did they give him a happy childhood?

That’s good.  I always imagined they did.

You’ll be proud of your son, Eliza.  He became a preacher and is married to a good woman who’ll be giving you a granddaughter.  Originally, the child was going to be a boy, but one of my readers thought a little girl with red hair might be more fitting.  So Brian and Lucy will be having a son as their next child.

*wipes tears from her eyes with a handkerchief*

You’ll enjoy meeting him when the time comes, Eliza.  I promise.  *pats her hand*  For anyone interested, here is Eliza at the time Bride of Second Chances takes place.

Ruth Ann Nordin mainly writes historical western romances and Regencies. From time to time, she branches out to contemporaries romances and other genres (such as science fiction thrillers). For more information, please go to www.ruthannnordin.com or check out https://ruthannnordinauthorblog.wordpress.com.
View all posts by Ruth Ann Nordin →
This entry was posted in Bride of Second Chances and tagged Eliza. Bookmark the permalink.