My Second Meeting with Jane (Heroine from Bride of Second Chances)

I was asked if I would bring Jane back in before writing tonight’s post where I’ll give her point of view after she and Jeremy consummated their marriage.

Oh, hey Jane.  I didn’t know you were right there.

I will not have my private thoughts on display for the whole world to read.  It’s bad enough everyone was privy to what happened…just now.  You left me in a most uncomfortable state of dress.

What?  You have a dress on.

But you left me without anything on in the last post and came on over to talk with me.

Yes, I did because some wanted an impromptu interview with you.

I know I shall die of embarrassment.  *grudgingly sits and crosses her arms* What do you want to know?

Was it good for you?

*gasp*  I am a lady, and a lady never discusses such things.

Well, did you at least enjoy kissing him?

I won’t answer that either.  Really, all of this is none of your business.  I don’t know why you’re so insistent on writing R rated books.  You’d do better to keep it all G.

I know you don’t mean that.

Of course, I mean it!

If that was true, you wouldn’t have requested to get a better look at him…down there.

*cheeks flush*  I will die of embarrassment before this book is over.

Jeremy called you beautiful and said you were lowly.  That’s nice, isn’t it?

You are appalling.  You make a typ-o like that and you call yourself a writer?

Because you’re prone to mistakes like the rest of us?

I am not.  I’m a character.  If anyone is to blame for anything, it’s you.  You’re the one who looks bad, regardless of anything I say or do.

Like the fact that you want to do another sex scene tonight?

I want no such thing!

Then why did I get this memo on my desk early this morning saying you want to do it again?

Isn’t it time you posted a picture?  You’ve been doing that a lot lately.  Don’t you want to pretty up this post?

I am doing no such thing.

Oh, here.  Slap this picture up!

Funny you should pick this one.

It’s just a picture.  Granted, it’s eerily reminiscent of the movie Titanic, but it’s a picture all the same.

A picture where you’re kissing Jeremy.

That is neither here nor there.

Sure.  If it weren’t, you would have picked this picture… 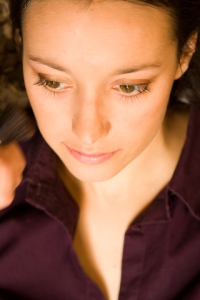 There are two things wrong with that picture.

You mean besides the fact that Jeremy’s not in it?

Jeremy has nothing to do with it.  First, I am wearing a shirt.  A modern shirt, mind you.  Remember what I said about being historically accurate?  Second, no one wants to see a picture of me.  There’s nothing special about me.

While Rebecca was a wonderful woman, you have some traits uniquely your own that endear him to you.

I see you’ll have to discover that in the course of the book, which you will.  Now, I have to write today’s post for another book, but I will get to yours this evening.

I don’t suppose I can talk you out of it?

You were the one who sent me the memo.

It wasn’t from me.  Someone forged it.  Probably one of your sex-crazed readers.

I’ll give you writer’s block, Ruth.

Well, we’ll have to wait and see how things play out for her tonight.

Ruth Ann Nordin mainly writes historical western romances and Regencies. From time to time, she branches out to contemporaries romances and other genres (such as science fiction thrillers). For more information, please go to www.ruthannnordin.com or check out https://ruthannnordinauthorblog.wordpress.com.
View all posts by Ruth Ann Nordin →
This entry was posted in Bride of Second Chances and tagged Jane Graham. Bookmark the permalink.